The lowdown on the blues

Stephen Wishnevsky, a musician himself as well as a luthier and an author, has discovered a 2004 book well worth the reading.

ESCAPING THE DELTA: ROBERT JOHNSON AND THE INVENTION OF THE BLUES By Elijah Wald. Amistad, 2004. 368 pages. 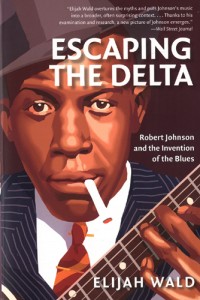 Elijah Wald is that rarity, a music writer who is a working musician. He was born in 1959, to George Wald (co-recipient of the 1967 Nobel Prize in Physiology or Medicine) and Ruth Hubbard, the first woman to hold a tenured professorship in biology at Harvard.

At age 18, Wald went to Europe to make a living as a folk-blues guitarist. For more than a decade, he traveled the world, fronting a blues band in Seville, a wing trio in Antwerp and a rock band in Colombo.  Back in the United States, he played bars and recorded two albums.

His publications include The Dozens: A History of Rap’s Mama, The Blues, A Very Short Introduction, How the Beatles Destroyed Rock ‘n’ Roll: An Alternative History of American Popular Music, Global Minstrels: Voices of World Music, Riding With Strangers: A Hitchhiker’s Journey, Narcocorrido: A Journey into the Music of Drugs, Guns and Guerrillas, Josh White: Society Blues,  River of Song: A Musical Journey Down the Mississippi (co-authored with John Junkerman) Exploding the Gene Myth: how genetic information is produced and manipulated by scientists, physicians, employers, insurance companies, educators, and law enforcers (with Ruth Hubbard).

His Dave Van Ronk: The Mayor of MacDougal Street (co-authored with Van Ronk) is being used as a basis for the forthcoming Coen Brothers movie Inside Llewyn Davis. Wald is as close to a renaissance man as one is liable to get in these sad times.

Escaping the Delta: Robert Johnson and the Invention of the Blues is a brilliant attempt to demystify the rural blues, and as such is an invaluable tool and reference for the modern American musician. Much of American pop music, so the story goes, is based on, nay, looted from the long-suffering black blues men of the Delta region of Mississippi.  I will not summarize Wald’s arguments, but his point is that this myth, as delineated in the works of Alan Lomax as well as in popular movies such as Crossroads and Oh Brother, Where Art Thou?, is an illusion not shared by the blues men themselves. He gives chapter and verse, record sales and advertisements in black- owned newspapers to show that the sad and miserable blues were not what the African-American population was buying, that instead they were supporting such dance and topical artists as Butterbeans and Suzie, The Harlem Hamfats and Washboard Sam, and piano/guitar duos such as the best-selling Scrapper Blackwell and Leroy Carr. These are the very artists who are dismissed as “Hokum” by the almost completely white writers on the blues for the last 50 years.

The actual artists, Wald shows, were no more ignorant and miserable than say, Fats Domino and BB King were a generation later. The white mythos of the blues completely ignores the huge success of such people as Louis Armstrong, Duke Ellington and Fats Waller, who also knew more than a little about the blues.

Not only a great read, this book is a must read.