Steve Wishnevsky finds a good dose of cold, hard, enlightening facts in a recent history that describes the growth of America in terms other than those we celebrate on the Fourth of July. 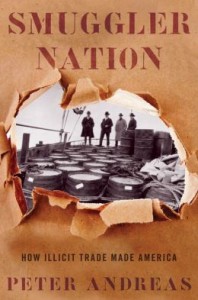 Here is another book full of facts educated people should know, but somehow refuse to put together into a coherent whole. In Smuggler Nation, Peter Andreas, a professor at Brown University, details how before America was a nation, before it was even a series of colonies, illegal commerce was the backbone of the settlements. Pirates and privateers, often subsidized by various nations, dabbled in illicit trade. If nothing else, they required ports to fence their stolen goods, places to buy illegal chandlers goods, and so on.

Port Royal, Jamaica, was founded in 1518 for exactly such purposes, and thrived most foully until destroyed by earthquake in 1692. By that time, the city of New Amsterdam, New York had taken up much of the slack. The famed triangle trade – molasses to New England, rum to Africa, slaves to the Caribbean to trade for molasses – was illegal, and vastly profitable on every leg of the voyage.

The resultant rum, smuggled into the Thirteen Colonies, was also used, in contravention of law, to trade with the American Indians for land, women, beaver pelts. The first large American fortune, that of the Astors, was founded on just such trades. Colonists became so used to their illegal profits that the Boston Tea Party and other revolts were not for any freedom more abstract than the right to not pay excise taxes on imports.

Other famous colonials were smugglers, notably John Hancock and the Brown brothers, John, Nicholas and Moses, who donated enough ill-gotten money to a new Rhode Island university to have it named after them.  And so it went. Once the international slave trade was banned by Great Britain is 1808, all slave trade to the United States was illegal – smuggling, in fact. So the great plantations of Dixie were of the same moral grounding as the grandiose mansions of modern Mexican drug barons.

We have never changed. The next great wave of smuggling was Chinese and other immigrant workers to bypass the Chinese Exclusion Laws. In an irony of ironies, much of the smuggling was over the Mexican border, because it was not thought at all necessary to limit or count Mexican laborers, as they would return home after harvest. So some Chinese were smuggled in disguised as Mexicans, just like in the Cheech Marin movie, Born in East L.A.

Then it was liquor, and now it is drugs. It’s a great American tradition.