Charles Todd, the mother-son writing team that’s had considerable success with the Inspector Ian Rutledge mysteries set after World War I, is back with another novel in their newer series starring Bess Crawford, a nurse in that Great War. 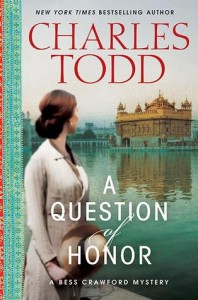 The fifth entry in the Bess Crawford World War I mystery series is a good tale that sheds light on a dark side of British history: the Raj, or British rule in India in the from the 19th into the mid-20th century.

Charles Todd started this series in part to attract an audience that finds the Ian Rutledge detective mysteries too heavy. A fan of well researched and literate historical fiction as well as of mysteries, I enjoy both series.

The Bess Crawford books are satisfying mystery stories involving a gently bred young woman who finds considerable strength when she volunteers as a battlefield nurse. She’s smart, attractive and open to the possibility of romance, a character likely to appeal more to some women readers than does the brooding, PTSD-suffering Rutledge.

But these books are by no means soft and feel-good. Bess sees plenty of the horrors of war: death in the trenches, overturned ambulances, the threat of poison gas, the shattered lives of the wounded, and the dreadful toll the war takes on British families and society as thousands upon thousands of young men are killed or maimed

In A Question of Honor, Bess, at a French battle site, comes upon a dying sergeant from India. He tells her that an officer who went missing a decade earlier after being suspected of multiple murders in England and India is alive and in France.

Shocked, Bess recalls a scandal that blighted the otherwise wonderful time she had spent growing up as the daughter of Colonel Crawford, the head of a British Army regiment on the Northwest Frontier in India. A Lieutenant Wade serving in the regiment had vanished, and officials believed he had murdered three people in England and his own parents in India. Everyone thought he had died while trying to flee through the Khyber Pass to Afghanistan. If he’s still alive, did her father play a role in his escape? Did Lieutenant Wade kill the Indian sergeant? Is he a danger to others? What is the truth of what happened in 1908? The honor of her father and his regiment is at stake.

Whenever she can grab a minute amid her nursing duties – which include frequent trips accompanying the wounded back to England – Bess tries to find answers to these questions and to the others that arise as her investigation yields unexpected information.  She learns a lot more than she bargained for, knowledge that could be dangerous to herself and others.

Bess finds herself questioning many things she had accepted as fact. As is so often the case, there is sadness mixed with satisfaction when justice is served.

This entry was posted in Mysteries and tagged Bess Crawford, Charles Todd, Mystery, World War I. Bookmark the permalink.