The magic is in the writing

Steve Wishnevsky takes a look at what happens when J.K. Rowling of Harry Potter fame tries writing a detective novel. He likes what he sees. 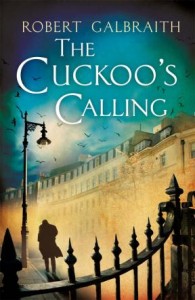 Struggling London Private Investigator Cormoran Strike has more going against him than your usual detective. He is not an alcoholic, or a brute, but he is a traumatized amputee war veteran, with few clients and an insane fiancée, whose periodic flights of wrath leave him camping out in his office, with little chance of resurrection.

When a distant childhood acquaintance asks him to prove his supermodel sister’s suicide was actually murder, Strike hires a temporary secretary, Robin, probably a Batman joke, and dives into the problem. Lula Landry was besieged by paparazzi and spent her nights doing assorted designer drugs in a never-ending array of bizarre clubs with her tinsel-coated social circle. She was a beautiful mixed-race woman, adopted into a classically dysfunctional family.

A kaleidoscope of friends, servants, stalkers, predatory clothes designers, and social-climbing neighbors all confound Strike and the faithful Robin, as they doggedly follow lead after lead to eventually, of course, arrive at the final truth. And, not incidentally, to create another billion-dollar franchise for Rowling.

Apparently J.K. Rowling wanted her writing to be judged on its own merits, and not on her name value. She did very well. This interesting take on the hardboiled detective trope could well have been written by a male. Rowling’s usual subtext, the British class system, is well evident, her sympathies are the same, and she makes some pointed observations on the celebrity life that might sting a little. Recommended.