History is important not only in itself, but also in the way it affects the present. Paul O’Connor reminds us of that in his review of a “fascinating“ book about a part of history Americans have too often overlooked. 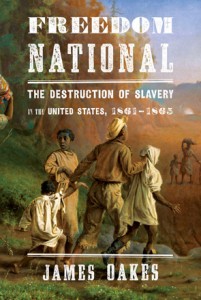 In 1907, while researching for his memoirs of Civil War-era Mississippi Valley life, John Eaton was surprised to learn that some slaves had been emancipated before issuance of the Emancipation Proclamation on January 1, 1863, and final ratification of the 13th Amendment banning slavery late in 1865.

Considering that Eaton’s job was to supervise these so-called “contrabands” in that valley in 1862, his amnesia provides the perfect illustration for the main point James Oakes makes in this fascinating history of the long legal, philosophical, administrative and military process the Union traversed in freeing the slaves: American history has somehow forgotten much of this story.

In our high schools and colleges, we learn that Abraham Lincoln freed the slaves with his proclamation, and from last year’s fabulous Lincoln movie we learned how he had to twist a few arms and feather a few beds to get that amendment passed.

Generally lost in our history lessons, but recovered in tremendous detail in this award-winning book, is how Lincoln and his radical Republican abolitionist allies freed, before the proclamation took effect, more than 200,000 of the approximately 4 million slaves held in the slave states and tens of thousands more before the Confederacy’s ultimate defeat in spring 1865.

Prior to the war, abolitionists had adopted a legal philosophy based on the Rights of Man, an Enlightenment treatise, that man is born free. They argued that this natural state, international law and the U.S. Constitution all established the principle that freedom was national in the United States of America but that the Constitution left to the states the authority to allow the holding of men, women and children in involuntary servitude. (The word slavery is not used in the original sections of the Constitution.)

When he was elected, Lincoln believed he had no authority, as a federal officer, to abolish slavery. Only the individual states could abolish slavery. His goal, and that of many Republicans, was to cordon off slavery in the current slave states, provide that new states would be free soil and then watch slavery die its own death.

With secession, the Confederacy forfeited that constitutional protection against federal intervention. Lincoln and leading Republicans still did not think that they could abolish slavery by federal law, but Lincoln could, under the rules of war, emancipate slaves. As commander-in-chief, Lincoln issued a series of orders, each bolder than the one it followed and some authorized by Congress, that led to the freeing of slaves in seceded states and, in some cases, in slave states that remained loyal to the Union.

These slaves were contraband of war, and thus it was within the Union’s military rights to seize them, free them and then put them to work for wages either as Union soldiers or laborers. Their families were generally accepted as part of that deal.

Emancipation, however, was not abolition. Union forces freed only a small percentage of the nation’s slaves by war’s end. Others were freed as Arkansas, Louisiana, Tennessee, Missouri, West Virginia, Maryland, Delaware and the District of Columbia abolished slavery on their own during the war. (They did so mostly under heavy Union pressure, both political and military.)

Still not clear, as the war ground to an end, was whether the remaining Confederate states would simply surrender, rejoin the Union, and then claim their constitutional right to maintain slaves who had not been emancipated. That’s why the 13th Amendment was necessary.

This is a fascinating story of great importance to our history. This is not a light read. At points it involves a great deal of legal reasoning and, as in any book of the period, a great deal of reporting on the vexing congressional debates and maneuvers of the day. But it is an accessible book, not one just for lawyers and political geeks. And it sheds a great deal of light on certain contemporary political forces that have rewritten Southern history into something more favorable than it was.