When things heat up 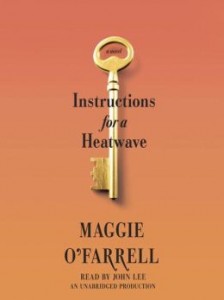 While it’s still summer, read Maggie O’Farrell’s latest novel, the aptly named Instructions for a Heatwave. If you read it, as I did, as an audio book when driving, you’ll really get the atmosphere right when you begin to listen upon returning to your hot car after it’s been parked in the sun. The emotional interactions in this family story are as heated as the weather.

In the midst of the infamous British heatwave in July 1976, Gretta Riordan discovers in the course of one ordinary-seeming day in her London home that Robert, her husband of 40 years, is gone. Saying he’s going around the corner to buy a newspaper, he vanishes. Later, she discovers that he’s taken money from their bank account on his way to wherever he’s gone.

One by one, we meet Gretta’s three grown children, as the word spreads that their father has gone missing. With varying degrees of reluctance, they gather at the family home to help their mother. Over the course of four sweltering days, they discover where their father has gone and why, along with a great deal more. And we, the readers, see through Maggie O’Farrell’s subtle prose into their separate lives and their interactions within the family.

Gretta is an Irish Catholic who has struggled mightily to keep Ireland and Catholicism alive in her brood, even though circumstances have led her to raise them in London. To her sorrow, not a one of them goes to church as an adult, but they are never far from echoes of their mother’s voice telling them what’s right and what’s a sin.

There was a moment early in the book, when, having met Gretta and her two older children, Michael Francis and Monica, I wondered if I really wanted to spend enough time with these characters to learn their story. Each of them can be tiresome, even exasperating.

Michael Francis, who sacrificed his hopes for the future when he married the woman who was carrying his baby, loathes his job as a history teacher. He loves his two young children, and tries to make the best of his circumstances, but his wife is not coping well with her own disappointments in life. Determined to finish her interrupted university degree, she’s taken to socializing with her fellow students and virtually ignoring Michael Francis. He’s terrified that she’ll leave him, and painfully aware that he bears significant blame for their problems.

Monica, the “good” child of the family, did everything right, marrying a local man who cared about her family, but her determination not to have a baby led to the disgrace of divorce. Now she’s remarried but miserable, living with her older husband in a farmhouse she hates and playing weekend stepmother to his unwelcoming two daughters. She’s a bit of a prig.

Yet, despite their woes, the stories of these people were intriguing enough, and O’Farrell’s evocative writing so deft, that I kept going. The Riordan family is a lot like anyone’s family: made up of people who are less than perfect, who drive you crazy at times, but whom you care about nonetheless. John Lee’s skilled reading, capturing the varied voices well, enhances the experience in the audio version.

And then, enter Aoife, the baby of the family and a character who grabs your heart. The black sheep, Aoife came along 10 years after Monica, and gave their mother fits from the start. After a terrible falling out with Monica, Aoife headed for New York, where through sheer intelligence, determination and grit, she’s made a life for herself. Her essential problem is what appears to be dyslexia, which went undiagnosed as she floundered through school in the 1960s and ’70s, considered stubborn, defiant and/or stupid. She has developed coping strategies to deal with her inability to read, but sometimes they fail – occasionally, with disastrous results.

Against the background of suffocating heat and water shortages, these family members uneasily come together in a heated emotional atmosphere to deal with the disappearance of their husband and father. With great skill, O’Farrell writes in shifting points of view, so that gradually we learn the story of each family member – and through those different stories, come to understand much more about the family as a whole.

Ultimately, the Riordans weather their shared crisis while managing to at least make progress in dealing with their individual struggles. They children gain insights into their own lives even as they learn shocking truths about their parents. Forgiveness flows in more than one direction.

O’Farrell, who was born in Northern Ireland and lives in London, is a skilled writer with impressive insight into the human heart and mind. Gretta and her three children all come alive, flawed and convincingly human. They may quarrel and hurt one another, but they are undeniably a family. They care about one another, and somehow, we care about them all.

1 Response to When things heat up