The only drawback to taking this book to the beach or on an airplane is that it moves along so quickly and enjoyably, you’ll find yourself at the end before you want to be there! 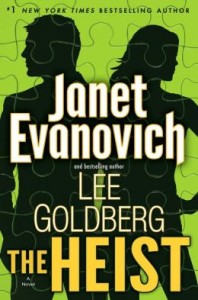 You could say this book, the start of a new series, follows a familiar formula. You’ve got a gal and a guy, forced by circumstances to work together despite their obvious differences. They argue, compete and get thoroughly disgusted with each other – but there’s always a strong undercurrent of attraction. We’ve seen it in countless movies, books and TV shows.

But why waste time analyzing when you could be reading The Heist? Go ahead; enjoy yourself.

Janet Evanovich has legions of fans for her best-selling Stephanie Plum novels. As I’ve admitted before, I avoided them for a long time, wrongly thinking books about a female bounty hunter in New Jersey would not appeal to me. When I finally “read” the audio version of Smokin’ Seventeen (that number in the title shows you how far along the series was before I let myself enjoy it), I was delighted. The books are well written, funny and delightfully entertaining. If your usual reading fare is serious, Evanovich’s books are the perfect change of pace – they are light but clever and sassy, never an insult to the reader’s intelligence.

Now Evanovich has teamed up with Lee Goldberg, also a successful author and the man who had the courage to novelize the hilarious Monk TV series. They’ve created one of those delightful duos of characters with a love-hate relationship, the duos that are a fiction staple (for good reason – they make for delightful reading/viewing). This time, we have an FBI agent and a most-wanted international crook.

Kate O’Hare, former Navy SEAL, is so dedicated to her FBI job that she won’t even try dating the guys her married sister is forever recommending. She’s especially obsessed with catching Nicolas Fox, a wildly successful (and charming) (and sexy) international con man who flaunts his criminal successes in her face. You might say the two have a relationship before they ever really meet.

But meet they do, and Kate finally catches her man. The only problem for Kate is, Nick manages to con the FBI too: He persuades the higher-ups to let him go, so that he can work with Kate in unorthodox ways to catch a crooked investment banker who has managed to elude agents working in conventional (read that legal) ways.

Nick and Kate assemble a most unlikely crew of helpers and engineer an elaborate scam of their own, one that has them jetting from a desolate American desert to a pirate-infested Indonesian island, with interesting stops in between.

There’s plenty of action, generous doses of humor, and just enough romantic interaction to keep the electricity sparking. I’m sure I’m not the only one eager for the next installment in this series.

This entry was posted in Thriller/Suspense and tagged Janet Evanovich, Lee Goldberg, The Heist. Bookmark the permalink.