Here’s a great vacation book, whether you listen to it, as I did, while driving, or read the print version.  I enjoyed Dan Brown’s blockbuster The Da Vinci Code, especially, but I’ve somehow missed a couple of his other efforts. Judging from some reviews I’ve read of The Lost Symbol, missing that one might have been a good thing. But I found this new book well worth the time. A caveat: Readers should take Brown’s books for what they are, thrillers, not scholarly research. Think fiction, a good tale grounded in enough detail to make it seem real. And as a fictional thriller, this book is another winner.

One more caveat: Many critics love to hate authors like Brown, who soar to the top of the best-seller list even though their books aren’t especially well written. Which raises the question, who defines well written? If a book is great fun to read, and people enjoy it, isn’t that worth something? 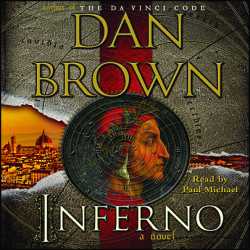 Robert Langdon, Harvard professor of symbology, wakes up in a hospital wondering what in the world has happened to him. He’s suffered a gunshot to the head and apparently has amnesia. The last thing he remembers is being back at Harvard, but now he’s in Florence, Italy.

Then a frightening woman bursts past security and kills the Italian physician who’d been treating Langdon. A young British woman, a doctor who’s been brought in to help partly because she speaks English, helps Langdon make a frantic escape from the hospital and the murderous intruder. And the game is on.

At times during the 17 hours of listening time (480 pages in print), you almost forget that almost everything is happening in the space of one day. So very much happens.

Langdon and the doctor who saved him, Sienna Brooks, take refuge in the modest apartment she’s subletting. There they begin to try to sort out what happened to him and why someone seems to be trying to kill him. But before they can do much, they must flee again. The female assassin and a black-clad army apparently are intent on killing or capturing him.

Bit by bit, Langdon begins to figure out that he’s dealing with a puzzle devised by a mad genius with a fiendishly evil plan to “save” the world. The symbols/clues he must interpret all seem to have to do with one of Florence’s most famous sons, Dante, the author of The Inferno. Each new bit of information Langdon figures out sends him and Sienna to another place where they hope to find the larger answers.

Each time, they are dogged by their pursuers, who have great resources, even a small drone helicopter, at their disposal. There are many rip-roaring chase scenes, along the streets and alleyways of Florence as well as through historic buildings replete with secret passageways, which Langdon knows of because of his past travels and connections.

Sure, Langdon tends to spout lengthy treatises on art, artists, history and famous buildings in a way that no one really talks, especially no one who’s operating with a head injury and almost no sleep. And sure, Sienna offers some awfully dumb-sounding questions and comments for a woman who’s supposed to be a super genius. Langdon and Sienna and some other characters all have an annoying way of pronouncing something that’s already obvious to the listener/reader and ought to be to them.

But … it’s a wonderful story, full of surprising twists and turns. Just when you think you’ve got something figured out, you realize you were just as misled as Langdon was. Neither Langdon nor the reader is sure whom to trust.

The tale carries you along, eager to learn what happens next. And, despite all the plots twists, those who choose to listen to the audio version will be grateful to find that the story is never quite so complicated that you get lost and wish you could flip back through previous chapters to figure out who’s who or recall what happened before.

Add to all this a fascinating lesson about Dante and his masterpiece, plus a vivid travelogue through Florence and, later, Venice. What more could you want in a vacation book?