This father knows best, or at least tells it best

I’ve followed Clyde Edgerton’s writing career from the beginning, when he blasted onto the North Carolina literary scene in a storm of controversy. His first novel, Raney, poked fun at Southern Baptists, and his employer at the time, Campbell University, an affiliate of the N.C. Baptist State Convention, was not amused. 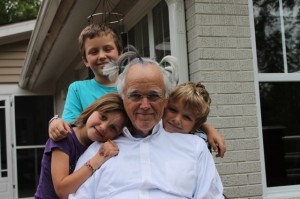 Since then, Edgerton has gone on to write nine more novels, most of which manage to get a message across through humor and satire, even if readers might be enjoying themselves so much they don’t think about that message at the time.

I’ve had the pleasure of interviewing Edgerton at least three times, and maybe more, over those 28 years. Our most recent chat, by phone, came a few weeks ago while I was working on a review of his latest book for the Greensboro News & Record. The review and interview ran in Sunday’s paper, June 9, for those who have access to the print version of that newspaper. The News & Record doesn’t make book reviews and interviews available free online.

Edgerton’s latest book is a departure from his usual fare. His only previous venture into book-length nonfiction was a memoir about flying, including his experiences as a fighter pilot in Vietnam. 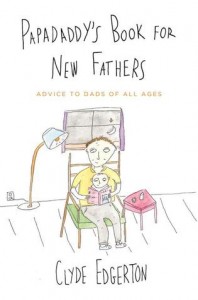 This new book is nonfiction musings about another kind of heroic endeavor: being a father. And, while Papadaddy’s Book for New Fathers (Little, Brown, $25), is a departure for him, it’s also vintage Edgerton in many ways. There is advice in this book, some of it actually useful, and there are messages worth hearing. But mostly, this book is funny. And since part of Edgerton’s intent is to get dads of all ages to relax and enjoy their children, the humor is part of his strategy. Humor also, as he told me in our interview, is about the only way he can write. If he tries to be too serious, bad things happen.

Edgerton has good reason to consider himself something of an expert on fatherhood. At 69, he’s the father of four, ranging in age from 6 to 30. His oldest, daughter Catherine, was born to Edgerton and his first wife, Susan Ketchin, also a familiar figure in the North Carolina literary and arts scene.

The three younger children – two boys and a girl, 9, 7 and 6 – are the offspring of Edgerton and his wife Kristina. Yes, at an age when most of his contemporaries are dealing with grandkids if they’re dealing with children at all, Edgerton has been going through the stages of parenthood all over again. He told me that he thinks he may be a bit wiser as well as obviously older.

The book would be a good read for any man, of whatever age, who is about to become a first-time father. As Edgerton observed, so many parenting books lose the dads in the early chapters about breast-feeding and such. He tackles guy topics such as cussing, poop and the prospect that one’s child might one day ride off with a motorcycle gang.

Because it’s written by Clyde Edgerton, this is also an amusing read for anybody who’s ever been a father, and for anybody who’s ever been a mother as well. Edgerton told me that at book signings, many people who bought copies have told him they planned to present them to adult sons who appeared to need a little nudge toward fatherhood. This book might reassure them that being a dad isn’t completely terrifying and might even be fun as well as rewarding.

This entry was posted in Contemporary Nonfiction and tagged Clyde Edgerton, fatherhood. Bookmark the permalink.