Past glories, past sorrows

Every time I read a book by Deborah Crombie or Elizabeth George, I have a flash of envy. These women are Americans, but they write excellent police mystery/suspense fiction set in England. Even the British critics say they do a good job, getting the details right. Not only are they successful authors; they also get to make frequent trips to England as part of their research.

I don’t wallow long in my envy, however, because I don’t want to waste time getting to what I’m sure will be another good novel. As usual, I wasn’t disappointed. 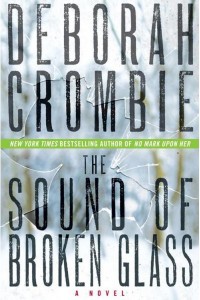 Crystal Palace is an area in South London that got its name from the Great Exhibition, a magnificent iron and glass building that was moved to Crystal Palace Park in 1854. The “palace” was a landmark until it was destroyed by fire in 1936. Now much of the area surrounding the park has fallen on hard times.

Deborah Crombie’s latest novel starring Detective Inspector Duncan Kincaid and Detective Inspector Gemma James – now a married couple raising three children – deals with a shocking crime in the Crystal Palace neighborhood. It also moves back and forth in time, from the present to 15 years earlier, when a lonely 13-year-old boy living in a Crystal Palace neighborhood struck up an unlikely friendship with a young widow, a teacher, who moved in next door.

As the book opens, it’s Gemma’s turn to be back at work while Duncan stays home with the traumatized 3-year-old they’ve taken in as a foster daughter. With her assistant, Detective Sergeant Melody Talbot, Gemma is sent to investigate the murder of a prominent barrister who’s been found naked, trussed and, apparently, strangled in a ratty Crystal Palace hotel. Is this kinky sex gone wrong, or murder? Who was with him in the hotel room? Was the motivation more than just the immediate sexual encounter?

Gemma and Melody search for answers, discovering much that is unexpected along the way.

Andy Monahan,  a guitarist on the brink of the big time, comes under suspicion because he was involved in a brief altercation with the dead barrister at a nightclub earlier on the evening of the murder. Andy, the reader knows, is the lonely boy who made friends with the widowed teacher in Crystal Palace.

Crombie deftly weaves past and present as the reader gradually learns what happened 15 years earlier and how it affected both Andy and the young widow. Things, however, are not always what they seem, and there are complications in the present as well.

As always, Crombie crafts a well-written mystery with enough twists, turns and human unpredictability to keep the reader guessing. The book stands on its own, but fans of the series will also be interested in the latest developments in the lives of Gemma, Duncan and their close friends and associates. Evocative descriptions of the great variety of London neighborhoods add to the richness of the story.

This is a thought-provoking book. How much are we influenced by our childhood experiences? What about betrayal, and guilt? What drives some people to the extreme of committing murder? Whom can we trust? What does bullying do to the victim – and to the bullies? Through her complex characters, Crombie raises good questions and avoids pat answers.

This entry was posted in Mysteries and tagged British detective fiction, Deborah Crombie, Kincaid and James. Bookmark the permalink.