Bob Moyer is back, again, from wherever it is he’s been, again. I can’t keep up with his globe-trotting ways. I’m just grateful that he keeps reading and writing reviews. Here’s his latest, with his promises that there are more to come. 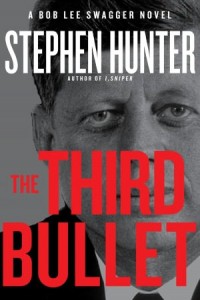 This book comes loaded with weapons, guns like Glock 19, M-1 Garand, short-barreled AK-47, C-96 Mauser, .264 Winchester Magnum and the Mannlicher-Carcano rifle. A number of these guns were used or could have been used in the Kennedy assassination.  “Could have been” is the key phrase here; without contradicting any of the facts in the Warren Report on the assassination, Stephen Hunter has constructed an intricate case for what happened to The Third Bullet that did so much damage, but left a lot of questions.

Another lethal weapon in the book is Bob Lee Swagger, aka “Bob the Nailer,” a Vietnam-era sniper who first appeared in another assassination-plot novel by Hunter, Point Of Impact.  The CIA tried to make a patsy out of Bob Lee, but he pulled a fast one and got the CIA agent to take a bullet, and the fall, instead.  He’s retired now, but a woman whose husband was killed by a hit-and-run driver thinks the death had something to do with the Kennedy assassination. Bob Lee doesn’t pay attention until she hands him a coat found in the Dal-Tex building across from the Book Depository on Dealey Plaza in Dallas – the smell of gun-cleaning fluid and a tire track on the coat make him take the case immediately. He knows whose coat it is.

He doesn’t know about the other weapon that’s doing all the damage.  That’s an ex-CIA operative who “died” years ago, and doesn’t show up here for 192 pages. He starts his memoir when Swagger starts looking for him.  The agent, Hugh Meachum, knows the coat was a loose end. He has quickly and literally killed off any attention called to the Dal-Tex building, and he tries to take out Bob Lee.  He can’t do it, because Bob Lee may be old, but he’s mean.

As Swagger sorts out all the clues, the agent spells out the saga of how a shooter besides Oswald had a shot, why Oswald was there in the first place, and the system that set Kennedy up for the kill. The author carefully constructs the premise, carrying the readers through some intricate reasoning without losing them.

Meanwhile, Bob Lee sorts out who the agent was, and then sets out to find out who he is and where he is now.  The two narrative lines come together with a lot of guns and tough guys in a giant conflagration all aimed at stopping Bob Lee.

Hunter has turned out a book that makes you turn pages faster than usual, so the book seems much shorter than its 485 pages.  If, like the many people who put this book on the best-seller lists, you find yourself still fascinated by conspiracy theories, you may like this one.  Go ahead.  Take a shot at it.