How much do I like Alan Bradley’s Flavia de Luce novels? Here’s an indication: This is the second time I have read the latest novel straight through – and then listened to the audio book version. Having read the book, I know the solution to the mystery, but listening to the audio version lets me savor any details I might have rushed over in my haste to see what happens next. And then there are the lovely British accents… Of course, not everyone has the luxury of experiencing the print and recorded versions of the book. If you must choose, you’ve got a winner either way. And now comes word that the BBC will be bringing Flavia to TV. More pleasures await.

SPEAKING FROM AMONG THE BONES. By Alan Bradley. Delacorte Press. 375 pages. $24. 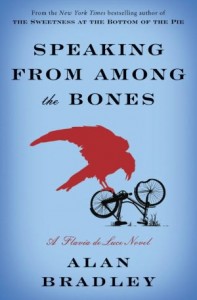 How many murders can there be in the vicinity of one small English village in the 1950s? Alan Bradley has now written five mysteries in which the daring and endearing Flavia de Luce, charging about on her trusty bicycle Gladys, figures out what nefarious forces have been at work in Bishop’s Lacey, and how they accomplished their vile deeds.

Not to mention that all these murders happened while Flavia was 11 years old. In Speaking From Among the Bones, though, Flavia is musing, as her birthday approaches, about what it will be like to be 12. And her oldest sister, Feely, gets engaged, so changes are coming.

There’s no need to worry our heads about such matters, however, just as there’s no need to ask why Flavia and her next oldest sister, Daffy, get away with never going to school. I think there may have been something in the first novel, The Sweetness at the Bottom of the Pie, about the three squabbling de Luce sisters having run off governesses or tutors. If that happened, their father, who spends most of his time mourning his late wife and collecting stamps while his estate crumbles around him, probably would have just let things drift. But why spend time going back to check on that detail when there’s a new Flavia tale to enjoy?

No, the reader can just suspend whatever disbelief is necessary and enjoy these novels for what they are: utterly delightful and totally original. In some ways, the Flavia de Luce series reminds me of the Harry Potter books. Harry, too, was 11 when his series began. Harry is an orphan being raised –and treated shabbily – by relatives who don’t love him; Flavia, whose mother died when she was a baby, is largely ignored by her grieving father and tormented by her two older sisters.  Both Harry and Flavia tackle big problems that endanger their lives. One big difference is that Harry uses spells and potions, but Flavia’s magic comes from her formidable brain – and sometimes her impressive knowledge of chemistry.

In Speaking From Among the Bones, Flavia is determined to be in the thick of things when the tomb of the village’s patron saint, Tancred, is going to be opened as part of the celebration of the 500th anniversary of his death.  But instead of the honored saint, what Flavia finds when she gets the first look into the crypt is a body of much more recent vintage: Mr. Collicutt, the church organist, who had gone missing weeks earlier.  Of course, Flavia immediately has many questions in mind, among them why someone would kill Mr. Collicutt, why the murderer would hide the body in the crypt and why the corpse is wearing a weird mask.

When Flavia has questions, she’s determined to find the answers, no matter how many people order her to stay out of the way and leave investigations to the local police.

As usual, Bradley does a masterly job of spinning out a complicated mystery in the best British village style even while entertaining us. Flavia narrates the book in the endearing voice of a child who is vulnerable and sometimes fallible, however precocious. Amid the murder and mystery, there’s plenty of humor, some of it slightly wicked. Flavia’s refuge in Buckshaw, the drafty old de Luce mansion, is the well-equipped chemistry lab left by a recent ancestor; her particular passion is poisons. And Flavia never lets rules or exhortations get in the way of an investigation.

Things get deliciously complicated, with multiple possible villains and interesting peripheral discoveries. If you read the book, you’ll turn pages quickly, drawn along by the mystery and by Flavia’s exuberance and personality. If you listen to the recording, you’ll find that Jayne Entwistle does a wonderful job of bringing Flavia and her associates to life.

And at book’s end, the de Luces, their ancestral home and the reader all are hanging on a proverbial cliff. It would be criminal to reveal more. Enjoy this book, and then suffer with the rest of us as we wait for Bradley to get on with the story in Flavia’ s next outing.