Chuck McGathy is the pastor of a small Cooperative Baptist congregation in Piedmont North Carolina. Earlier, he spent many years as a chaplain in the U.S. Navy. He’s used to ministering to people with different beliefs and experiences of religious faith. Here, he finds a book that is surprisingly insightful and useful in helping others understand those in the conservative, Evangelical Protestant tradition.

WHEN GOD TALKS BACK: UNDERSTANDING THE AMERICAN EVANGELICAL RELATIONSHIP WITH GOD. By T.M. Luhrmann. Alfred A. Knopf. 434 pages. $28.95 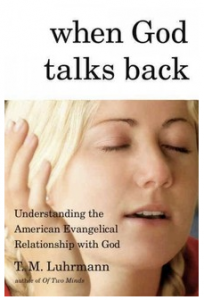 Performing the role of mediation requires that one must be able to understand and speak two languages. Helping non-Evangelicals understand and even respect the experience of conservative Protestant Christians is the aim of this book. T.M. Luhrmann brings her considerable credentials (she is educated from both Harvard and Cambridge Universities and is currently a professor of anthropology at Stanford) as a psychological anthropologist to the task.  What is more, she actually participated in an Evangelical church called the Vineyard so that she might understand more intimately what individuals experience. The result is this fascinating book.

As a pastor of a church in the mainline Protestant tradition, I expected Luhrmann to sound critical, even a bit disdainful of conservative Christians. I was pleasantly surprised by what I read. Although in some cases she seems to misunderstand the breadth of Christian theology (not all Evangelicals and certainly not all Christians are six-day, young-Earth Creationists), in the main she does a commendable job grasping the teachings and culture of Evangelical religion. In so doing she is able to describe in a credible and compassionate fashion the reality of the Divine in the life of everyday church-going people.

The author was not shy about pointing out the dangers and weaknesses inherent in Evangelical Charismatic Christianity. She begins by brilliantly retelling the story of the modern revival of charismata in Calvary Chapel and then through the Vineyard. For some within these or similar movements, her observations might be painful, but she never belittles the excesses, like the obsession with demonology found in some churches. She does, however invite the reader, Christian and non-Christian alike, to ask important questions that can possibly lead toward a better, clearer faith in the personal and present God who does speak to us.