A lot of fun, with fringe benefits

Paul O’Connor reports that while the temperatures have been up around 103 degrees in North Carolina, the highs have been in the low 70s in Portland, Ore., where he’s visiting. Maybe that’s why he has energetically written another book review, putting me to shame. I’ve been reading and listening, but not doing much writing. I’m glad to hear from Paul, even if his weather report makes me envious. 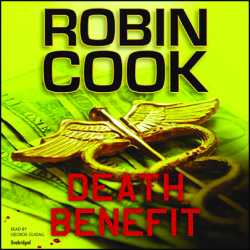 I figure we make a deal with an author when we read popular fiction. If he or she will present an original story based on plausible circumstances and that story holds our interest for the flight to grandma’s or a few days on the beach, then, OK, we’ll accept the stock characters, the occasional cliché and the inanity of the experience.

The good popular fiction writers give us something more, of course. They might introduce us to the culture of the Mafia – The Godfather – or to life running an airport – Airport. These authors research their subjects deeply and give us a bit of education about science or history or culture.

In his latest book, Robin Cook gives us all of what we expect and then an interesting side lesson on regenerative medicine, infectious diseases and hedge funds.

Pia Grazdani is a fourth-year student at Columbia University Medical Center, and the most beautiful woman in New York, even when she has a black eye. She’s so brilliant that the Nobel Prize-winning researcher for whom she works deviates from his usual practice of ignoring everyone else in the human race to tell her so. She has a boyfriend who is a schmuck, but who is also a brilliant medical student and nice.

Then there are the bad guys who, by betting against their own company’s investments, made a lot of money in the Wall Street crash. But now they need new jobs. So, they plan to get even richer by buying the life insurance policies of diabetics and other terminally ill people who are in financial trouble – mostly due to the recession these two helped start – and who are likely to die soon. The bad guys will then collect the “death benefit,” buy more policies and securitize the policies, much as they did with low-grade mortgages in the early 2000s.

So, how do these two worlds meet?

If the Nobel professor starts regenerating kidneys and other human organs, then the people upon whom the bad guys are depending to die will live. And there goes the business model. Of course the bad guys don’t realize this until they have loaded up on policies and then learn that a wicked woman who used to work for them but quit before she, herself, also got rich anticipating the 2008 market crashes, has started shorting the stock of their new company. She’s repeatedly described as a “bitch.”

Throw in the Albanian mafia, a few elitist academic types at Columbia, a grandmother in Arizona and, of course, a middle-age man who abandoned his child when she was 6, doesn’t see her for 20 years and then is surprised that she doesn’t run to Daddy in joy, and you fill out the book.

Cook knows how to write these stories, having written 30 others. This one is a lot of fun, so much so that at the end, I parked in my motel’s lot to listen to the last two CD tracks, narrated deftly by George Guidall, to learn the conclusion. I couldn’t wait until my next day’s drive.

And that’s where I was so disappointed. After having woven this terrific thriller that tied the medical, investment and mafia worlds together, Cook gives us the most simplistic ending, one that took no imagination whatsoever.

And, on top of that, we never learn what happened to grandma, the schmuck boyfriend or the arrogant Columbia administrators.