The Hare With Amber Eyes

Here’s our latest review, by Robert Moyer of Winston-Salem, whose interests are as wide-ranging as his talents. 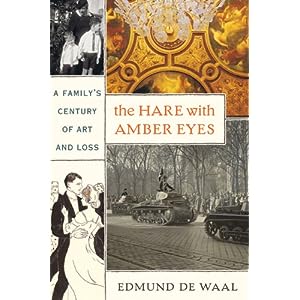 THE HARE WITH AMBER EYES: A Family’s Century of Art and Loss. By Edmund De Waal, Farrar, Straus and Giroux. 351 pages. $26.

In the London hallway of potter and author Edmund De Waal, a brass vitrine on a mahogany base holds 264 netsuke, small, carved objects that once served as toggles at the ends of strings that held bags or boxes on a kimono sash.  In mid-century France, these humble objects — a hare with amber eyes, a beggar, two wrestlers — became objets d’art, as japonisme swept through Paris.  They entered the extensive collection of Charles Ephrussi, a scion of  the dynastic financial family from Russia, whose empire reached from Odessa to the Hotel Ephrussi on rue de Monceau to the Palais Ephrussi on Vienna’s Ringstrasse, large dwellings that housed treasures of art, old masters, Monets,  Renoirs —  and Jews with coats of arms.  Charles’ netsuke sat among all that art.

Proust used Charles as a model for Swann in his novels; the Viennese Ephrussis were held up for diminution in countless anti-Semitic novels.  Charles sent the netsuke to his cousin Viktor in Vienna as a wedding present; there, they were relegated to his young wife Emmy’s (De Waal’s great-grandmother) dressing room, far from the gold plates, the sterling silver and the grand art of the Hotel Ephrussi.

Now, they are the only remnant of the Ephrussi family empire. This book tells their story, one teeming with complexity, so varied that even De Waal, as he nears the end of his search, gets confused:  “I no longer know if this book is about my family, or memory, or myself, or is still a book about small Japanese things.”

Delightfully, it is all those things, and more.  In De Waal’s hands and words, the netsuke are “small, tough explosions of exactitude,” artifacts that touch off sparks of immediacy in the history of his family, of an era.  We follow the vitrine up the stairs into Charles’s apartment, where his friends, perhaps Proust, perhaps Renoir, take out the small objects and comment upon their sensuality, their eroticism.  Later, in Emmy’s dressing room far from the French haute monde, they lose their japonisme, as the maid Anna opens the vitrine and lets the children play with them while their mother dresses.  Sometimes Emmy will “…start a story for her children about the elderly driver, the flower-seller and the student.”

So the author, too, tells his stories, looking out the same window as Emmy, looking into documents, handling the netsuke.  He draws upon his background as a potter:  “Touch tells you what you need to know: it tells you about yourself.”  As he traces the path of the netsuke, armed with only a few family letters and documents, he reveals so much more.  Reading the anti-Semitic descriptions of his family both in Paris and Vienna, he is nauseated, “…as if a vitrine is opened and each of them is taken out and held up for abuse.” After WWI the family loses enough to make them count what was once countless, to worry for the first time about possessions. Up until the arrival of the Third Reich on the Ringstrasse in 1938, De Wall says, “The real keeps slipping out of my hands.”  He does not understand “what it means to be part of an assimilated, acculturated Jewish family.”  The Ephrussi family “are so perfectly assimilated they have disappeared into Vienna.”

Until the Nazis arrive at the door, and within hours take the house, the art, and shortly, the bank.  The author’s grandmother helps her mother and father escape with nothing.  Everything of value is gone.  And the netsuke? After the war, Anna, the maid, gives De Waal’s grandmother the 264 netsuke.  “They (the Nazis) didn’t notice the little figures. So I just took them.  And I put them in my mattress and I slept on them.”  De Waal characterizes Anna’s act as the greatest care they have ever had — Japanese objects owned by a Jewish family hidden in an Austrian mattress.  Each object  saved is “a resistance against the news, a story recalled….”  Anna disappears,  and the netsuke go with De Waal’s great-uncle Iggy to Japan, where they become objets d’art once again, and the beginning of the author’s relationship with them and his uncle.

As he visits through the years, the narrative becomes a travelogue of sorts, as De Waal explores his families’ history of living as Russians in Vienna, as Austrians in Japan, as Dutch in England.  An account of the Holocaust, a rumination on loss and possession, a memoir, a treatise on art, De Waal melds the book’s many strands into something greater than their sum — a tremendous story.

“Objects have always been carried, sold, bartered, stolen, retrieved and lost,” says De Waal near his conclusion. “It is how you tell their stories that matters.”  De Waal tells the story of the netsuke well, and in a way that matters.

This entry was posted in Contemporary Nonfiction, Memoir. Bookmark the permalink.

1 Response to The Hare With Amber Eyes