My growing fondness for (OK, addiction to) audio books has been educational in more ways than one.

I had been aware of Janet Evanovich’s Stephanie Plum novel series for years. How could I not? Her new books regularly land on The New York Times best-seller list.

But did I read them? Oh, no. Not me. They were about a female bounty hunter. Not my type, I assumed, without ever trying one. I don’t like those hard-boiled female characters. I don’t like books that focus on violence. Give me the cozier mysteries, with an emphasis on setting, character, human interactions, etc., etc.

But one day I found myself with a long drive looming and no book to listen to. A Stephanie Plum novel was the only audio book at the local library that looked halfway acceptable. How bad could it be, I wondered, as I carried it to the checkout desk.

Soon, I was laughing my way down the highway. Another of my unfounded prejudices was banished. That was last year. So when this latest Stephanie Plum book arrived, I couldn’t wait to get started. 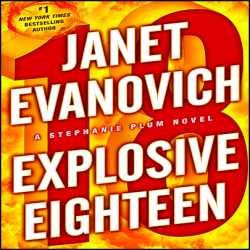 If you want to smile, laugh and enjoy yourself mightily, listen to the Stephanie Plum books as read by Lorelei King.

If you haven’t met Stephanie Plum, put all your preconceptions about bounty hunters aside. Stephanie is not some barely feminine tough gal who regularly beats up on deadbeat criminals who have jumped bail. Far from it.

She’s just a nice girl from a blue-collar neighborhood in Trenton, N.J., who’s trying to make it on her own. Of course, she has to drive the few miles back home to her parents’ house pretty often, especially if her mother is making one of her favorites for dinner. And her wacky grandma, who lives with her parents (just ask Stephanie’s long-suffering father), is forever nosing into her business, particularly if it involves romantic matters. Mom does a fair amount of meddling herself.

Without an attractive job beckoning, Stephanie talked her cousin Vinnie into letting her work for his bail-bond business, collaring the low-lifes who jump bail and dragging them back into court. She gets paid when she succeeds. She’s not particularly adept, or strong, or brave. Her failures may not provide any money for Stephanie, but they do give her readers lots of amusement.

Seventeen books with numbers in their titles preceded this one, and I plan to listen to all those I’ve missed. At some point, Stephanie acquired a sidekick, Lula, a former “ho” who’s supposed to be working as a clerk but prefers to be out helping nab crooks. Lula is big (call her fat at your peril), black and sometimes blonde.

Stephanie also has two men in her life, dating back to One for the Money, the series starter.  One is Morelli, the handsome cop with whom she had a high-school fling. The other is Ranger, a highly successful, high-level bounty hunter himself, with a business, RangeMan. Morelli might make a good husband, except that he works all the time. Ranger is not marrying material, but boy, is he attractive. As Explosive Eighteen opens, Stephanie has just returned from a disastrous Hawaiian vacation. Obviously, something went down involving Morelli and Ranger. Everybody wants to know, but Stephanie isn’t talking.

She’s too preoccupied with all the people who are out to get her. Her seatmate on the flight home from Hawaii ended up murdered in L.A. during a layover. Now the FBI, fake FBI and who knows who else are determined to get a photograph the man left with Stephanie. The problem is, she doesn’t have it.

And meanwhile, Cousin Vinnie’s bail-bond business isn’t going well at all. As usual, the plots and subplots are enough to propel Stephanie and friends into sometimes dangerous, sometimes ridiculous, always entertaining predicaments.

Stephanie is just an average girl trying to make it in a not-so-average business. She’s endearing partly because she’s not superwoman and partly because she manages to laugh at herself when appropriate. She also has her more serious moments, when she wonders what to do about her conflicted love life, wonders if she’ll spend the rest of her life with only her hamster as her constant companion. She’s surrounded by characters who are at times hilarious, yet very real.

With Lorelei King’s expert narration, these characters all come to vivid life. Her voices and accents are wonderfully done. You can’t help but laugh at Lula’s outrageous pronouncements or roll you eyes at Grandma’s crazy comments. And Ranger – well, just you have to hear his sultry Cuban-American voice.

It’s no wonder the Stephanie Plum books are so popular. Who knew they were so funny?