A review not to be missed

Paul O’Connor started the year out by sending this review to me, which was an admirable way for him to start the new year. Unfortunately, I was on a bird-watching expedition to Lake Mattamuskeet when the review hit my inbox, so I didn’t start the new year in quite so efficient a manner. Fortunately, my intrepid contributing editor reminded me that this important review was gathering virtual dust.

THE EMPEROR OF ALL MALADIES: A Biography of Cancer. By Siddhartha Mukherjee. Scribner. 470 pages. Hardcover, $30. Softcover, $18. 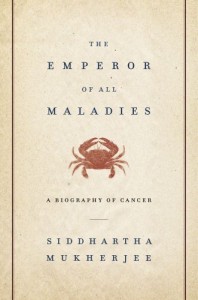 Even as a fifth-grader, I recognized the naiveté of my comment.

It was shortly after my father had died of lung cancer, and his sister, my aunt, was discussing how I was now the “man of the family” and that I had to get a good education. I agreed and said I’d work extra hard for the science fair, doing a cancer experiment.

After reading Siddhartha Mukherjee’s incredible book, I no longer feel so stupid for the comment. After all, I was only 10 and a lousy science student. For 2,500-plus years now, some of the world’s greatest scientists have been pursuing a cure for cancer, chasing down dead-end avenues, missing the obvious and allowing personal differences to stall collaborations that might have saved lives. I had good company in my failures.

Few books receive the kind of universal acclaim of Emperor of All Maladies. It is the 2010 Pulitzer Prize winner for nonfiction and either a winner or finalist for a number of other prestigious awards. Mukherjee has been interviewed by numerous newspapers, magazines and broadcast shows. The reviews are all smashing. I recommend The New York Times book review podcast, which I heard last year.

So, why are we reviewing it a year after its publication?

Two reasons: The first is that the book is enormously important. Cancer is one of the leading killers of people around the world, and it is important to know as much as this book teaches us about it. Americans, through their taxes and their generous gifts, through their research universities and hospitals, have paid for much of the research into this disease, and they will be expected to do more of the same in the future.

Here in North Carolina, the General Assembly spent almost $200 million building the N.C. Cancer Hospital in Chapel Hill and then set a goal of providing $50 million a year in perpetuity to conduct cancer research there. Anyone who reads this book will be better informed about something that is both a major health concern and a major public policy issue.

The second reason is to bluntly state that if this writer can read this book and get something out of it, anyone can. If a “C” student in high school biology who gets squeamish hearing about any and all medical procedures can take away as much as I did from this book, just think what everyone else can learn.

Mukherjee has a tremendous gift as a writer, an ability to make extremely complex and arcane information understandable to the layman. He says he wrote the book to best answer the questions of his own patients – he’s an oncologist at Columbia University in New York. He’s done that splendidly.

Mukherjee calls this a biography of cancer because he makes clear that cancer is us. It is a living, thriving part of many of us. It has lived and mutated for thousands of years and is very much the definition of life itself. So, his biography proceeds through the lifespan of man’s recognition of it and man’s efforts to defeat it.

The biography moves through several of the major themes and conflicts in the anti-cancer effort. The first is the argument that cancer cannot be stopped until science has a full understanding of exactly what cancer is. While some scientists held to this principle, others said they could not wait for science to figure that out; the quest might take centuries during which people would die unnecessarily. These researchers sought therapies to fight cancer instead, albeit without fully understanding what they were up against and why some therapies would work and others would not.

Another major conflict arose from the best way to treat cancer: massive surgery, limited surgery, radiation or chemotherapy? Are there other options? Can some be combined?

Finally, there is the cause of cancer: Is it genetic, viral, or from external sources? Through the ages, that debate has shifted, and much of the focus today is on gene-related causes.

The recently released soft-cover edition contains a 13-page addendum, a reprint of the 2011 interview that appeared in a magazine for oncology nurses. In it, Mukherjee says that just in the time since he wrote his book other major fields of study have accelerated, thus leading scientists to consider even other causes for cancer.

That 1962 science fair project never got done, but I’ve remembered that conversation with my aunt for almost 51 years.

Most of us have lost someone to cancer, either a relative or friend. Many of us will personally fight cancer, and some of us will lose that battle. It only makes sense to learn as much as possible about this adversary, and this book may be the most comprehensible vehicle for many of us to do so.

This entry was posted in Contemporary Nonfiction and tagged cancer, Emperor of All Maladies, medical research, Mukherjee. Bookmark the permalink.