I’ll be tidying up from 2011 for a while. Somehow, life intervened, and I got behind with reviews toward the end of the year. Here’s a review of a book that Bob Moyer read during his trip to Germany, a review that somehow did not get posted in a timely fashion. But hey, the book’s still worth reading, so in case you missed it … 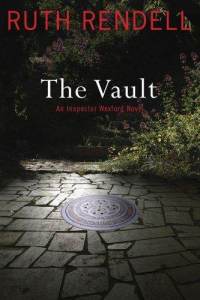 He isn’t what he used to be.

He’s retired now, and lives part of the time in a coach house behind the very posh London house of his very successful daughter. He’s lost a bit of weight, but most of all he’s without his job: “He wasn’t Lord Peter Wimsey or Poirot, he wasn’t even a policeman any longer.”

But he is still Wexford. When a chance meeting with Tom Ede, a constable when Wexford knew him but now a superintendent, produces an offer to help on a case, he jumps at the chance. The case is a complicated one with very few clues – four bodies in the coalhole of a house in St. John’s Wood. Three of the bodies landed in what Wexford calls “the vault” years ago; the fourth, within the last few years. It’s just the kind of case the Inspect – the former inspector – likes to get his teeth into.

Things aren’t what they used to be, however. He can’t require suspects to answer his questions, he has to travel with an officer, and he can’t order anyone around. In fact, he has to couch his comments in the form of statements that don’t sound like criticisms. He does find one good thing, however:  “In his previous life,…he had seldom allowed himself likings and disliking. Now he could. It was an advantage.”

Whatever the limitations, when he’s on the case, Wexford is Wexford. He methodically–if more carefully–collects information, then constructs scenarios. Given more time, he does so on lengthy walks:  “Walking, he had decided when he first took it up in a serious way, was the best occupation for thinking… He assembled his thoughts as he walked briskly…”  His perambulations also provide some loving descriptions of London locales: “Tomorrow, … he would walk along the Spaniards Road to Highgate, go down the hill and find where Dick Whittington, as the sun came up, had turned and seen the streets of London paved with gold.”  When questioned about his conclusions by his cliché-spouting, church-going (both things put Wexford’s teeth on edge) supervisor, Wexford replies with what could be his credo: “You say I’m acting on my imagination and you may be right, but I see it as acting from my knowledge of human nature.” Of course, because he is Wexford, he solves the case.  Unfortunately, because he is no longer a policeman, he unwittingly puts himself in danger. When he gets out of it, he sits down to do what his fans will recognize – go over the details with his old friend and colleague Burden.  It’s a fitting conclusion – talking about business over a drink.

This entry was posted in Mysteries and tagged British mystery, Rendell, Wexford. Bookmark the permalink.