Steve Wishnevsky has tackled a big book about a big subject and come away almost – but fortunately not quite – at a loss for words to describe it. 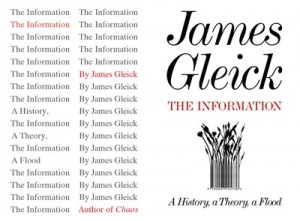 This is quite the ambitious attempt, to press the entire history of Information – transcribed speech, from talking drums to Cloud Computing – between covers.  James Gleick handles this task deftly, producing a very readable, even sprightly book, of only five hundred pages.

We are, as humans, separated from the rest of nature, first by speech and then by our capacity to preserve speech, to create history, to possess memories that last longer than one life. Our memories reach back at least to the Epic of Gilgamesh, four and a half thousand years ago. Gilgamesh became both Moses and Hercules, Odysseus and even Tarzan over the course of time, but never quite lost his original identity as King of Uruk, the son of gods.

This book is not about that, at all; it is about everything else, and it is filled with heroes, sung and unsung, from Carrington, who deciphered the talking drums, through Morse and his telegraph, through Charles Babbage and Ada Byron, who invented the (steam powered) computer and programming, up to more modern notables such as Alan Turing, cryptologist and tragic figure.

These are deep waters, as deep as the human subconscious and as expansive as the cosmos, and Gleick literally dances over the interfaces like an elf. His writing is always lucid, frequently witty and wry; even his chapter epigraphs (epigrams?) are most amusing. I cannot describe this book; it touches on the entire scope of human knowledge. I can only recommend it to any person who desires an understanding of how the world and the mind actually work.

If you can free yourself from the rush of trivia, of Too Much Information, then this book is a great tool toward helping you cope with “The History, The Theory, The Flood” of information.

Not to do more than mention the concept, which this book does not, one can see a clear tendency toward some sort of greater consciousness for humanity, what some theorists dub, “The Global Brain.” Gleick hints at that, but does not spell it out. He does demonstrate that thought, information, is clearly subject to evolution, and that the process of evolution has not ended with the iPad. In fact, it is obviously accelerating.

This entry was posted in Contemporary Nonfiction, Uncategorized and tagged Gleick, The Information. Bookmark the permalink.