Goodbye, and thanks for the series

Bob Moyer says this about this review: “I had the privilege to hear Robert B. Parker read from his excellent baseball novel Double Play.  Afterward, he answered questions in his gruff but somehow gracious way – until someone asked him about his ‘research’ on the times, Jackie Robinson, etc.  Parker interrupted him and said, ‘Wait a minute … I didn’t do any research.  I’m a writer.

I still laugh every time I think of that. Like his writing – short, sweet, to the point.  Like Elmore Leonard, he just writes the parts you read, not the parts you skip over.” 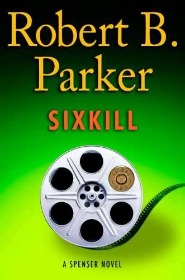 Back in the first book, before he was a best-seller, the private eye named after a 16th century poet listens to a pompous college president exhort him to search for The Godswulf Manuscript.  Spenser simply replies, “Win one for the Gipper.” That wisecrack is arguably the first in a long string of snappy comebacks that lead through 39 books and 40 years to the latest adventure, Sixkill, where he does it again. Spenser is seated at his desk, feet up, when a professional assassin walks in and tells him not to worry, he won’t kill him today.  Without batting an eye or putting a wrinkle in his carefully tailored sport coat, Spenser replies, “Promises, promises.”

And so it goes, another in this series in which the plot, at least serviceable, at best stunning, gives Spenser a chance to munch specially prepared meals, muse about life and crime with his main squeeze Susan, make wisecracks, muscle around the bad guys, and, oh yes, dispense justice.

The plot here is an updated replay spun out of Hollywood’s sordid past, the Fatty Arbuckle scandal of 1921.  A young girl is found dead in the hotel room of the very disgusting but very successful comic actor Jumbo Nelson.  Everyone thinks Jumbo did it – except the cop investigating. Everyone wants Spenser to find out whodunit – except Jumbo.  He fires Spenser, but, of course, that doesn’t stop our gourmet gumshoe.  He doggedly continues until he has come across a satisfactory conclusion.  In this case, he wrangles his way through a bevy of bad guys hired by the Hollywood Mafia, who have a fortune tied up in Jumbo’s success.  He has help, however – Sixkill.

Former star football player, nightclub bouncer, and Jumbo’s “driver, booze buddy and pimp,“ Cree Indian Zebulon Sixkill is the heart of this book.  Until he was introduced to Spenser’s fists, he had never lost a fight.  Jumbo fires him for getting beat up, but Spenser, sensing a sputtering spirit inside the hulking body, takes him under his wing.  Before long, Sixkill has stopped swigging the juice and started sprinting and swinging fists at Spenser’s (updated) boxing club.  Before long, he’s slinging bon mots and bodies around in a Spenser-like style; it all concludes quite satisfactorily (Parker can put some punch into his fight scenes) in a Boston version of Custer’s Last Stand.

Spenser and Sixkill survive the book; Parker didn’t.  He passed away in 2010, but rumor has it that the series lives on.  Perhaps they’ll just segue to a Sixkill series, something like Son of Spenser, or Spenser Lite.  However, whoever takes over will be hard pressed to keep Parker fans happy.  The Spenser series was – is – the most consistent, satisfying and quick-reading success in modern mystery fiction.  We’ll miss you, Robert.

This entry was posted in Mysteries, Thriller/Suspense and tagged Mystery, Robert Parker, Spenser. Bookmark the permalink.