Once his No. 1 Ladies’ Detective Agency books became hits, Alexander McCall Smith came out with an impressive number of other series. McCall Smith was born in what is now Zimbabwe, taught law at the University of Botswana and medical law at the University of Edinburgh, and lives in Scotland. Either he’s extremely prolific, or he’d been writing novels for decades, just waiting for one series or another to serve as his entrée to big-time publishing.

Thought I love the Ladies’ Detective Agency books, until recently I had not gotten hooked on any of the other series. I have not even tried some of them. I had tried the series set in Scotland and starring Isabel Dalhousie, and while I liked Isabel, I had a problem. Mma Ramotswe’s voice in the Ladies Detective Agency books is so strong and compelling that I kept hearing it as I tried to read the other series. In my head, Isabel came across as an impostor.

Then I tried listening to one of the Isabel Dalhousie books on tape, and a reader with a lovely Scottish accent helped me overcome that problem. I now enjoy that series as well.

But Mma Ramotswe is still my No. 1 favorite. 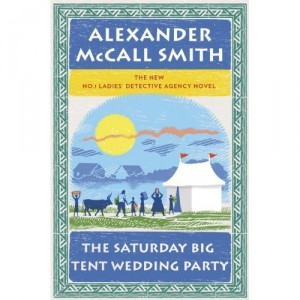 I have sometimes tried to figure out why Alexander McCall Smith’s No. 1 Ladies Detective Agency novels are so satisfying. The mysteries involved are usually fairly minor in the scheme of things.  The stories have more to do with the mundane concerns of daily life than with what we sometimes think of as the big questions. They are set in Botswana, but life even in Botswana is often filled with much that is ordinary. Not a lot that’s momentous happens in most of these books.

Then McCall Smith’s latest entry in the series arrives, and I give up any such musings. I’d rather just enjoy the pleasure of reading the new book.

In this latest, the long awaited wedding of Mma Precious Ramotswe’s assistant at the No.  1 Ladies’ Detective Agency, Grace Makutsi, to Phuti Radiphuti is finally growing near.  Will anything interfere with Mma Makutsi’s happiness? After all, Phuti is still recovering from his terrible accident, and that unscrupulous man-stealer, Violet Sephotho is still around – running for Parliament, of all things.

Meanwhile, Mma Ramotswe is called upon to investigate a particularly troublesome crime: Cattle are centrally important to traditional life in Botswana. But at a remote cattle post, two cows have been cruelly killed. Who could be responsible? There are too many suspects, and Mma Ramotswe fears that her inquiries may lead her into ethical dilemmas.

And that’s not all that’s going on. Mma Ramotswe has unsettling visions of her late, lamented tiny white van, the one her dear husband, Mr. J.L.B. Matekoni, had finally replaced for her.

And Charlie, the ne’er-do-well apprentice at Mr. Matekoni’s garage, has run away after been named as the father of a girlfriend’s baby.

As her fans will expect, Mma Ramotswe deals with these various problems with kindness, wit and a great deal of quiet wisdom.

Maybe that’s why these novels are so satisfying. Patient and persevering, Mma Ramotswe seeks out the simple answers to life’s complications. Ultimately, she leaves the reader feeling sheltered and comforted, as she does, by the enduring serenity of the vast African sky.

This entry was posted in Mysteries and tagged Africa, Alexander McCall Smith, Mystery, No. 1 Ladies' Detective Agency. Bookmark the permalink.

One Response to Into Africa