Charlie Lovett’s new novel is a thriller, for sure

Charlie Lovett turns his considerable talents to writing an international thriller, with results that measure up to his fans’ high expectations. 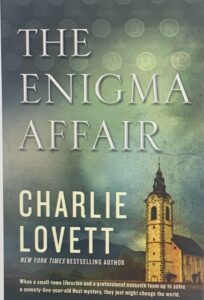 Through four fine novels now, Charlie Lovett has proved that he is an imaginative, skilled, thoughtful, intelligent and all-around accomplished author. It should come as no surprise that when he set out to write an international thriller, he created a good one.

The Enigma Affair gives readers plenty of what they expect in a thriller – lots of fast-paced action, danger, plot twists, secrets, mysteries, betrayals, troubled characters … And, as you might expect from Lovett, who’s also made a name for himself in the world of antiquarian books and as a biographer, there is plenty of well-researched history.

The story starts in northwestern North Carolina, in a small mountain town where Patton Harcourt is a librarian – and where in the first sentence of the book, she knows exactly how to respond when a bullet whizzes soundlessly past her ear as she is baking chocolate ganache-filled profiteroles on a Sunday morning. Nor is she particularly surprised that someone is trying to kill her. She knows of at least three people with a good reason to want her dead.

When an armed man stealthily enters Patton’s house a while later, she’s ready for him. The man, who says his name is Nemo, eventually more or less convinces her that he’s not the person who tried to kill her, that he has neutralized – with a tranquilizer dart – the shooter.

Once they are away from the house and somewhere that might be safe at least briefly, Nemo tells Patton that he’s a professional assassin who was hired to kill an old friend of hers. Instead of accomplishing his mission, he’s being pursued by two men looking for something at the old friend’s house – and who now seem also to be after Patton.

As they try to figure out what the men are after, Patton and Nemo find a message from the German SS in World War II, encoded by an Enigma machine.

And with that they are off, to London and Bletchley Park in England, where Ruthie Drinkwater, an old love interest of Patton’s, just happens to be an Enigma expert. With that friend’s help, they learn that Hitler’s right-hand man, Heinrich Himmler, believed that his alchemy project had succeeded. Then they discover that a deceptively nice German woman seemingly on a crusade to return precious books stolen by the Nazis to the families they belong to is actually Himmler’s granddaughter – and the head of a group of white supremacists bent on acquiring enormous wealth so that they can make Hitler’s warped vision of the ideal world a reality after all.

From there, Patton, Nemo and a growing assortment of unlikely allies race against time, trying to win, as Nemo describes it, “the last battle of World War II.” The hunt takes them across Europe, Munich and Prague, and into mountainous regions of Switzerland, Germany and Italy. They are trying to stop the neo-Nazis – and to stay alive in the process.

Lovett does a fine job of keeping things moving, even as he moves back and forth in time from the war to the present, and from Patton, Nemo and their motley crew to their present-day enemies. We learn about the Holocaust, the code breakers at Bletchley and the poisonous white supremacist mindset that still threatens the world.

And we come to know the modern-day characters, especially Patton and Nemo. As you might expect from Lovett, they are more complex than they seem at first. As we gradually learn, they are deeply flawed and scarred – and they are trying desperately now to do the right thing.

Lovett has given us a book that’s hard to put down, one that’s speaks to the world we live in even as it reminds us of a dark chapter in our history.

Charlie Lovett, who divides his time between Winston-Salem and England, is also a successful children’s playwright and a leading authority on Lewis Carroll and Alice in Wonderland.