When things get really strange…

Paul O’Connor reviews a novel that transcends categories while revealing a lot about human nature. 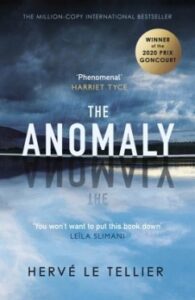 On March 10, 2021, Air France Flight 006, high above international waters off the coast of Nova Scotia, encounters a massive storm that the meteorologists had not forecast. Unable to get around or above the storm and with just minutes’ warning, the pilot and crew ready the passengers for what will be a dangerously rough ride.

It is so rough, including stretches of free fall toward the water, that even the airline’s most experienced international pilot, Capt. David Markle, doubts the plane will survive. Then the plane breaks out of the storm into calm skies and bright sunlight. Markle reconnects with JFK International Airport traffic control and things get weird.

AF 006 had not traveled through a meteorological storm; it had come through a physical anomaly. The disturbance will upend the lives of the 250 passengers and crew and their families. It will also leave the reader of this thriller, originally written in French in 2020 and published in English in 2021, wondering just what the hell he or she is reading: Science fiction, philosophical fantasy or psycho-babble. Maybe something else?

Whatever it is, it is gripping. The winner of the Goncourt Prize, awarded to the author of the “best and most imaginative prose work of the year” in French literature, The Anomaly takes us through the lives of a select number of passengers both before March 10 and after. And here’s a suggestion for the reader: Pay attention to the dates that begin most chapters.

To avoid a reveal, I’ll just say that something happened when the plane transited that “storm” that science fiction writers have imagined before. I remember a movie about an aircraft carrier and a big storm in the Pacific Ocean, for example. And there’s a Netflix series, too. But the science fiction is just supporting cast here.

The brilliance of this novel is Le Tellier’s depiction of the human reactions to the anomaly. Before the U.S. government reveals what has happened, it forms an expert committee of religious leaders. Quite humorously, they don’t agree on much, but the reader gets a quick primer on world religions. At the same time, other government groups formulate responses that rival, in their stupidity, Schitt’s Creek reruns.

Once the news is public. the reaction runs the gamut of human personalities. Some characters adjust positively; others do not. Church people have a strong negative reaction. The military is confounded. The intelligence services are suspicious. Children find it a lark, and a Nigerian rap singer finds liberation.

And the reader will most likely keep asking: “Yikes, how would I react in this situation?”

To further confuse, or maybe entice us, there is one character, a writer and translator of literature, who gets an inspiration after the flight, quickly dashes off a philosophical tome, mails it to his editor and then jumps to his death. The book is published posthumously as The Anomaly, and the sample quotations cited in our novel are beyond the understanding of this reviewer. Oh, and the book immediately becomes an international bestseller, which, of course the book I’m reviewing, also called The Anomaly, became.

For the reader of the typical bestseller fiction available in airport bookstores, The Anomaly will be a huge upgrade. This is a novel of great complexity and human observation.

But it might make you a little wary of any Air France flight from Paris to JFK.

This entry was posted in Contemporary literary fiction, Thriller/Suspense and tagged Herve Le Tellier, The Anomaly. Bookmark the permalink.