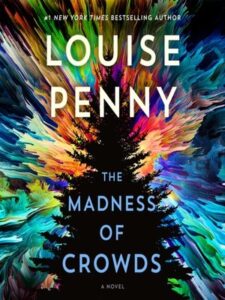 Chief Inspector Armand Gamache is back in Three Pines, the Quebec village faithful readers know and love, for the 17th novel in Louise Penny’s wonderful series. But that does not mean that all is well.

The previous novel, last year’s All the Devils Are Here, had Gamache and his family in Paris, with plenty of evil and intrigue. Now faithful readers who missed the quirky characters back home in Canada see that Penny was laying the groundwork in that book for one of her richest stories yet.

It’s winter, just after Christmas, and COVID has been conquered by vaccines, at least in this fictional world. But the effects linger, in feelings of loss, horror, sadness and fear.

Gamache’s family is all here now, enjoying the snow and the good company. Jean-Guy Beauvoir, his son-in-law, has brought his wife and children back from France and rejoined the Surete du Quebec as Gamache’s second in command to Gamache, the head of homicide.

It seems odd to Gamache that he is asked to head up security at a nearby university when a professor of statistics gives a lecture. Surely there will be hardly anyone there on a late December day.

But as he does his homework, researching the woman who is to speak, he is both horrified and worried. Professor Abigail Robinson has been using statistics to “prove” that the strains on the system during the COVID pandemic make it clear that the best way to secure a prosperous future is to get rid of the weak and vulnerable, the people who are a drag on society.

She looks respectable and sounds reasonable. And across Canada, people are beginning to parrot her message. “All will be well,” she tells them, if they just listen to her. When her followers gather, so do opponents. Tempers flare, and crowds can all too easily become mobs.

Sure enough, there is an attempt on Robinson’s life at the gathering, foiled by Gamache’s quick action. But he is not able to avert a murder that happens soon after that.

The mysteries – whether the two events are related, who committed the murder and why – are the framework on which the novel is built. But as always with Penny, the novel is a great deal more than the mystery. There are questions of morality and ethics, and about how people who seem normal and decent can be caught up in something so wrong and abhorrent. There are questions about how “madness” can take hold of crowds.

And there are also heartening moments, as Penny’s strong message of the importance of family and friends, and of doing the right thing, shines through – and laughter, as the characters who inhabit Three Pines are just as eccentric as ever.

This is a thought-provoking and ultimately satisfying novel, one of the best in a very good series.

This entry was posted in Detective fiction, Mysteries, Popular fiction and tagged Louise Penny, The Madness of Crowds, Three Pines. Bookmark the permalink.