A powerful look at how “we” got here

Bob Moyer reviews a book about black performers in America – and a great deal more. 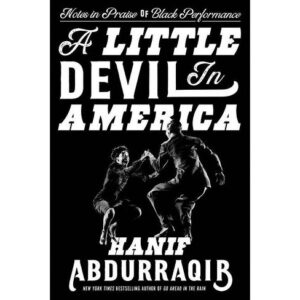 This book is much greater than the sum of its pages. Hanif Abdurraqib has created an amalgam—a showcase of Black performing artists both known and unknown,  a cultural commentary and a personal memoir. He weaves performers and performances in and out of black and white society with the eye of an astute observer and the voice of a poet, all to show “…how we got here in the first place,” the “we” being America and  a guy who grew up Black in Columbus, Ohio. It’s an amazing book.

The portraits of performers alone make the book worthwhile reading. They range from the well-known Josephine Baker to the unknown blackface dancer Master Juba. Here’s the suave host of Soul Train, Don Cornelius, originally a journalist who suffered congenital brain problems at the end of his life. There’s Dr. Don Shirley of Green Book fame, a successful academic in the field of psychology before his musical career. Patty Labelle, Trayvon Martin, Michael Anderson, Octavia Butler and Sun Ra all show up in a chapter titled “Nine Considerations of Black People in Space.”

That title is emblematic of how performers become springboards for the author’s contextual exegeses on American life. Master Juba is featured in “Sixteen Ways of Looking at Blackface,” a free Black man who danced in saloons and halls for money. He bested the leading white dancer of the time on numerous occasions, both of them performing in black face. He beat him by mimicking the white dancer’s steps, amazing the audience. “How,” says the author, “when the world outside determines worth, it might be vital for the marginalized to find an arena in which they can unmistakably dominate.” Juba doesn’t ultimately win, of course. When he took off his blackface, he was still a black man. He died destitute in London. The author goes on to reference Al Jolson, and the politician who dressed like Michael Jackson in the ’80’s, all leading up to “…the bare bones of it … how blackface … is such a horrifying look.”  Worst of all, in the way people slather the blackface on themselves, he is repulsed:  “That’s the way they think we look like.”  Horrifying, indeed.

In essay after essay, and sometimes in between, the author references the performers and their acts to throw light on systemic racism. Beyoncé’s performance at the Super Bowl half-time featured “…two dozen Black women, each of them dressed all in black, perfectly coiffed afros radiating from beneath their black berets.”  The image of Black Panthers was clear and immediately brought a backlash, explained by the author as when “…Black people who decided to use their platform to not so subtly reclaim that which had been commodified and sanitized in the name of American Comfort, the pushback was often irrational, coming loudest from those who were the most afraid.”

The most effective essays are the ones in which the object of his attention leads to the true subject—himself. Nowhere is that journey clearer than in “I Would Like to Give Merry Clayton Her Roses.”  Merry Clayton was a backup singer famous for the t27 seconds in the Rolling Stones’ Gimme Shelter when she wails “rape, murder.” Although she had a career, she lost the child she was carrying at the time, and never got the recognition she deserved. The author then segues to the death of Meredith Hunter, the black man beaten to death at the Stones’ Altamont concert, ironically while they were singing Gimme Shelter. A song about violence, a beating, the author says:  “There is no reprieve from the machinery of violence and everyone is a tripwire away from setting off the wrong type of explosion.” Hunter is buried in an unmarked grave. The essay ends with the author’s plea, “I want shelter and I don’t even know what that means anymore.”

Bursting with joy, love, pain, bitterness and poignancy,  A Little Devil in America is the prose version of the Soul Train dance line, celebrating “Black people pushing other Black people forward to some boundless and joyful exit.” The book resonates long after its finish.

This entry was posted in Contemporary Nonfiction, Current Events. Bookmark the permalink.