A good story – that raises questions

Bob Moyer, aficionado of mysteries and thrillers, also has an abiding interest in nonfiction books about the Holocaust. 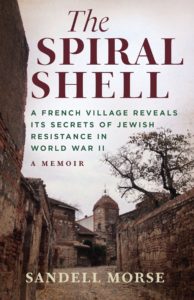 Sandell Morse did not know what she was going to write when she arrived at the artists’ retreat in Auvillar, France. She knew the village was a center for the Resistance in World War II, many Jews  sheltered there, including 70 children, and one family had her surname, Hirsch. When she began searching for landmarks and locations of that period, she was met with denial, feigned ignorance, and frequently, “Je ne sais pas.”  In short, her efforts to uncover the carefully buried history of the village’s Jewish affiliation was met with — well, resistance.

Nevertheless, she persevered. Not a journalist, with only fractured “Duolingo” French, she set off to dig up the story. She pulled on strings that stretched back to events repressed or forgotten, pulling stories into the present. One of those strings was Germaine,  who worked in le colonie, the home that sheltered the Jewish children.  She recounted stories of taking the children into the woods when the Gestapo arrived, of transporting children around the countryside. Germaine offered her another string —Yvonne, one of the 69 children who survived the war. All along the way, Morse encountered systemic anti-Semitism, even amongst the locals she befriended over the years of her research. Each thread led to another revelation. Her namesake family was arrested and transported. The father returned after the war, buying up property in the village where he had sheltered. Over the years, he became an object of scorn and dismay because of his handling of the property, and, Morse surmises, his constant presence as a reminder of the Vichy past.

While researching how Jews were concealed in the village, the author searches for the Jew concealed within herself. Growing up in a family that assiduously sought assimilation, she gave up wearing her Star of David pendant at the age of 8; “Why advertise?” said her father. Now, she encounters Jews who do not present their Jewishness to the public. When she asks Germaine’s daughter, who was born during the war, why she is reticent, she replies, “You cannot do that here.”  Throughout the book,  the author recalls all that she herself did not do, in order to cover her Jewishness.

As the book proceeds, the author becomes more empathetic and passionate about this history, these people denied recognition. With a sharp eye for detail, and a nose for a good story, she ventures into territory that verges upon inappropriate — making up stories from those who have suffered. Since the Holocaust, scholars and many others have questioned the appropriateness of writers and artists to mine that material in their work. As they say in the South, her heart’s in the right place, but there is a fine line between exploration and exploitation. She takes many a moment, both factual and anecdotal, and follows it up with “I imagine…”, “Perhaps…”, and, even further afield, “I fancy…”. The resulting frequently lengthy writing is vivid and imaginative, but just that—imaginative. The reader must be careful to separate fancy from fact:  The story must be honored, but not elaborated.

Morse goes one step further into controversial territory. Her deep engagement with her source, Germaine, leads her to a conflation between their lives:  “We were linked, Germaine and I, by our rebellious spirits and by our struggle, when young, to be both women and mothers.” How uncomfortable that this housewife from suburban New York, barefoot, wearing hippie clothes, equates her experience with that of a post-war, penniless Germaine cycling through Paris streets with her three children on the bike.

Passionate? Yes. Informative? Yes. Well-written? Yes. Questionable? Yes. The journey into Vichy France and the journey into her heritage are interesting; they are not equal.