The boy is back

Bob Moyer takes a look at the latest book by one of America’s most respected mystery and thriller writers. 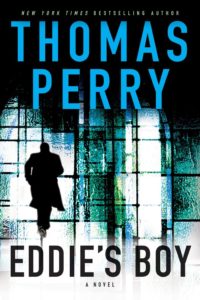 Thomas Perry never fails to produce a pager-turner. His protagonists, whether in stand-alone novels or series installments, Native American females or Boston-bred white guys, go about their likable and lethal ways at breakneck speed. Perry fans cheer them on, eagerly awaiting the next clever means of maiming or dispatching the bad guys—and wondering why they enjoy all the mayhem so much.

Eddie’s Boy continues the story of The Butcher’s Boy, one of the early entries in the Perry oeuvre. This is the third installment in The Butcher’s Boy series over a 39-year period. The “boy” was brought up and trained in two trades by Eddie —butcher and hit man. He’s been living in retirement in England until someone wants him dead. When the reader first sees him, he’s driving to the airport with three dead bodies strapped into seat belts, and a fourth one in the trunk. He has to get away, but he doesn’t know from whom. After another half-dozen bodies, he decides to go back to the U.S., where obviously someone wants him gone.

When he gets to the States, he not only returns to his home, but he also takes a trip into the past. As he tracks down who put out the hit on him, he travels through the past with his ersatz parent and protector, Eddie. Besides an entertaining trip into the training methods involved in being an assassin—how to use a garrote, what part of the body to put a knife into, how to shoot with two .45 pistols at once — he comes across a lesson that has kept him alive: “He knew that what Eddie had been teaching him was about living,” not killing. He was an expert at staying alive, and that’s what Perry puts into those pages we turn with avidity. He’s not just knocking people off; he’s working his way back home. That’s what we’re cheering.

And, many machinations and funerals later, he makes it. He’s getting a little long in the tooth, but don’t put it past Perry to bring Eddie’s Boy back one more