All aboard for Whistle Stop! 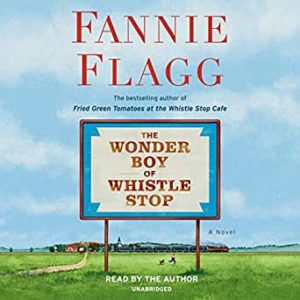 You are in for a treat. Need an antidote to COVID, the election and all the other things 2020 has thrown at us? Here it is. Read this book, or, better yet, let Fannie Flagg read her own words to you.

Don’t worry if you somehow haven’t read Flagg’s Fried Green Tomatoes at the Whistle Stop Café. You can still love this latest Whistle Stop book. In her own sometimes rambling, conversational way, Flagg fills in the relevant background and history – and gives us some insights we didn’t get the first time. In any event, this delightful story can stand on its own. The characters and their joys and heartbreaks come wonderfully to life.

I read the first book some years ago and remembered its broad outlines. The more I listened to the new one, the more I wanted to revisit some of the details of the first. A few minutes online accomplished that.

If you never read Fried Green Tomatoes, reading Wonder Boy will surely make you want to do so, or at least watch the movie. Come to think of it, I might watch the movie again. Whistle Stop could be addictive.

But for now, just enjoy Wonder Boy. As you’d expect, this is a story liberally laced with humor and warm insights into the foibles of human nature. It’s also a classic Southern novel, told through sorts of the colorful anecdotes and memories that might be shared on a front porch on a warm, honeysuckle-scented summer night.

The wonder boy of the title is Bud Threadgoode, the one-armed boy (you’ll find out why) who grew up in the 1930s in the little Alabama railroad town called Whistle Stop. He was raised by his mother, Ruth, and his Aunt Idgie. Though they could hardly have been more different on the surface – Ruth was a church-going, convention-obeying proper lady, while Idgie, always a tomboy, was given to drinking, gambling and other sins – the two had a close relationship that went beyond the café they operated together.

Through Flagg’s delightful stories, we learn how Bud grew up, married and had a daughter and a career that took him away from Whistle Stop. Now he’s an elderly widower, living in a posh retirement home in Atlanta, near his only child, Ruthie, herself a widow. Ruthie married into old Atlanta money, but unfortunately, Martha Lee Caldwell, a domineering mother-in-law who lives in the mansion next door, was part of the deal. In Flagg’s skilled hands, Martha Lee becomes a rich source of humor.

After many enjoyable diversions and excursions back and forth over nearly a century, Flagg gets to the main action of the new novel. All sorts of developments are triggered when Bud, without telling anyone, runs away from the home on a quest to see what’s become of his beloved Whistle Stop. He eventually discovers that Whistle Stop essentially is no more; the railroad business changed, people moved away, and the town became a ghost town. What buildings are left – even the beloved old café – are in shambles.

But don’t worry. Things are about to get really interesting, in a good way.

Been needing a respite, a treat, a real escape? Here it is.