Paul O’Connor, a veteran journalist, offers a review of a book that he says isn’t easy to read – but worth the effort.

CASTE: THE ORIGIN OF OUR DISCONTENTS. By Isabel Wilkerson. Random House. 388 pages. $32, hardcover. 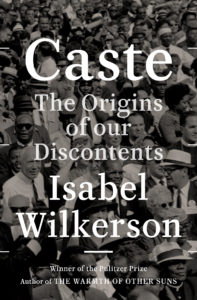 Many weekday mornings, a friend calls to discuss the news and express his astonishment at the conservative political positions of the people he grew up with in Western North Carolina.

“Don’t they understand that they are voting against their own best interests?” he often asks.

Isabel Wilkerson, in Caste: The Origins of Our Discontents, would disagree with his analysis. His rural white friends understand what they are doing, she would say. They vote for the one interest they find more important than good health care, a healthy environment and a fair tax system: the status that comes with being white in America.

“The precarity of their lives and the changing demographics of the country induced (during the Obama years) a greater need to maintain whatever advantages that they (non-affluent whites) had come to expect and to shore up the one immutable characteristic that has held the most weight in the American caste system,” she wrote.

That may sound like a fairly common assessment of white working-class voters – that they are duped into voting against their own best interests by race-baiting candidates. But it is different.

Wilkerson makes a clear distinction between two -isms that we often conflate: racism and casteism. The first entails malevolence and sometimes violence. Casteism often appears benign, sometimes committed by people who harbor no ill will toward people of color. It is the effort by people in one caste to maintain their advantage over those in the lower castes.

Before we reach the above quote on page 325, Wilkerson has made her case that America supports a caste system that is among the world’s most severe and entrenched, and that many white Americans, foreseeing the year 2042, when demographers predict that whites will no longer constitute a majority of the population, fear that they will lose control of their country and the privileges that being atop the caste system brings.

Caste and class differ, she writes. Many are the professional athletes and high-tech gurus who were born into working- or lower-class families who, by nature of their accomplishments, now occupy the highest of our financial classes. But, when it comes to caste, there is no escaping. Wilkerson, with all of her accomplishments, may live in a beautiful home in an exclusive neighborhood, but she still suffers the humiliations of casteism from white plumbers and airline stewards.

Caste has been inescapable, to date, in America; class has not.

Wilkerson, who won a Pulitzer Prize as a reporter for The New York Times and then wrote an astounding history of the African-American diaspora, The Warmth of Other Suns, stands as one of our most compelling chroniclers of contemporary America. As she showed in her previous book, she has mastered the art of telling the stories of ordinary people.

In Caste, she draws from the stories of people she has interviewed, and adds both her own stories and others from historical sources. In every case, the stories provide the examples for the characteristics of casteism that she will soon explain. For example, in telling her airline experience, she explains the inescapability of the caste system.

Many Americans, including myself, probably never considered the American racial structure as a caste akin to that in India, nor of the Aryan social structure of Nazi Germany, but Wilkerson makes very strong historical arguments about their similarities. In one chapter, she relates the history of the Nazi racial purity laws.

To formulate a racial purity policy, the Nazis looked to other nations. They found what they wanted in the American South, focusing on how states made racial segregation, and the permanent African-American subordination, part of the legal structure. In the end, these Nazi policymakers left their conference in awe of how America could portray itself worldwide as the land of the free and equal opportunity when it legally relegated a major portion of its population to second-class citizenship. The Nazis also concluded that the American laws were too harsh for German consumption and diluted them, at least in the initial stages.

Wilkerson, in conclusion, agrees with my friend that his old pals are not acting in their own best interests by clinging to the caste system. It harms us all, pigeonholing all of us based on the color of our skin and other meaningless attributes, thus asking too little of some and too much of others.

This is not a pleasant book to read. To the contrary, it’s disheartening. But it is also transformative. It has the potential to provide us with a whole new way of seeing our social structure, a perspective we really need.