The courage to love 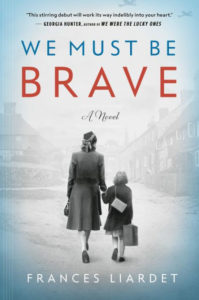 This beautiful, moving novel is the first to be published in America by Frances Liardet, a British writer and translator, and what a marvelous debut it is.

As the story opens, Ellen Parr, a young bride, is one of the residents of the English village of Upton who rush to help people who have been evacuated from nearby Southampton as German bombs fell. In the back of a bus, Ellen finds a small girl, sleeping and alone.

Ellen and her husband, Selwyn, temporarily take Pamela to their home, along with some other refugees.

But what was supposed to be temporary becomes more permanent, as they learn that Pamela’s mother was killed in the bombing and her father has long been absent. Eventually, at first against her husband’s wishes, Ellen takes Pamela into her heart as well as her home, cherishing her as the daughter she would otherwise never have.

As the story moves back and forth in time, we learn Ellen’s past and why taking in Pamela is so important to her. Because of bad decisions on the part of her father, Ellen’s family had fallen from a privileged existence to very hard times in the years leading up to World War II. She came to know poverty and hunger, and eventually was, like Pamela, left on her own.

She’s a practical and determined young woman, who fell in love with Selwyn even though he’s much older and, because of an injury in World War I, unable to be a “proper” husband and father a child.

Pamela fills an important gap in her life. But Pamela is not really hers to keep, and one day the thing she most dreads comes to pass. Pamela is taken from her home and eventually from her life.

But even a diminished, bereft life goes on, across the decades, and one day, a much older, widowed Ellen encounters another girl in need. Penny reminds her of Pamela almost more than she can bear. Eventually, Penny repays Ellen’s kindness in an unexpected way.

This story of love, courage and friendship is beautifully written, with vivid, memorable but unobtrusive descriptive passages and great understanding of complex emotions. The novel is skillfully understated, yet – or maybe because of that – it says so much.

The audio version is lovingly read by Jayne Entwistle and Juliet Mills. I admit I was worried when I saw that Entwistle would be doing much of the narration, because I have her voice firmly in my head as that of Alan Bradley’s intrepid young heroine, Flavia de Luce. But such is her skill that I was soon so immersed in this story that I temporarily forgot Flavia.