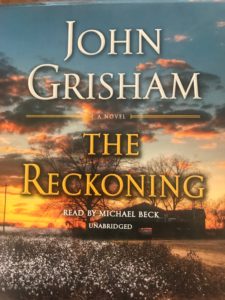 As John Grisham’s latest novel opens, Pete Banning, a highly decorated World War II hero, family man and scion of a respected cotton-farming family in northern Mississippi, decides he can’t put off what he must do any longer. Methodically, he drives into the small town of Clanton near his family’s farm, walks into the study of the the Methodist Church, and shoots dead the pastor, his longtime friend Dexter Bell.

When the sheriff comes for him, Pete goes quietly to jail. And quiet continues to be the operative word for Pete, who steadfastly refuses to say anything about the crime other than acknowledge that yes, he did it, and he knew what he was doing. He lets his old friend, the family’s lawyer, represent him, but he refuses either to explain his motivation or to plead insanity, his only possible defense.

Pete’s wife has been in an insane asylum since he had her committed months earlier, and their two children are away at college, where he orders them to stay. His only emotional support is his crusty sister, who lives alone on her half of the family farm.

It’s the fall of 1946, and Pete hasn’t long been home from World War II. For much of the war, he was missing and presumed dead in the Philippines, and he returned with serious wounds that required months of hospitalization and rehab.

A considerable chunk of the book is classic Grisham courtroom procedure and legal machinations, as his lawyers grasp at any straw to save his life or at least delay his execution, and eventually, try to save the family farm and home from legal claims.

As all this plays out, we come to know Pete’s family – his sister and children, and gradually, his wife.

Pete, though, remains mostly an enigma, who continues to insist: “I have nothing to say.”

Interspersed with the story of the legal battles and their effects on the family are the most gripping parts of the book, the story of what Pete experienced during the war. In a departure from his usual fare, Grisham gives us the vivid and unforgettable story of desperation, heroism and survival. Pete survived the Bataan death march and the starvation and other cruelties in a Japanese prisoner-of-war camp. Eventually, after more harrowing experiences, he becomes one of the many guerrilla fighters living in the jungle and mounting daring attacks on the Japanese.

Obviously well researched, Grisham’s tale is an eye-opening lesson in World War II history for those of us who know only the lighter, sanitized version.

The legal thriller part of the book and the war story part of the book seem almostdisconnected, which may be part of what Grisham is trying to say. We want what’s hinted at to become clear – that Pete’s wartime experiences led to his seemingly inexplicable decision to murder the preacher, that PTSD was a major factor. And we want that connection to be a mitigating factor that will spare Pete and his family from the worst consequences of his actions.

But PTSD wasn’t known at that time, and the closest we come to it in this novel is people speculating that Pete “went crazy.”

The jacket says that The Reckoning is in the Southern Gothic tradition, and that’s true as far as it goes. The novel is without a doubt a tragedy, and one in which the tragic flaws are not just in the main character but also in the entire society – that of Mississippi in the 1940s, with all the poisons of entrenched racism and other prejudice, hatreds, ignorance and destructive secrets.

Ably read by Michael Beck, the audio version of the book is compelling and, especially in the war narratives, unforgettable.

1 Response to The never-ending war