I don’t know when Bob Moyer finds time to read and  review books when he’s always traveling, playing pétanque and writing haiku, but I’m glad he does.

That’s what you get in this collection of essays: two Richard Russos. 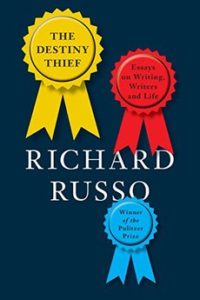 The first Richard Russo is the one most people know and love, the critically and commercially successful writer of Empire Falls and Nobody’s Fool. He’s an entertaining guy who openly professes “It’s life’s comedy I feel most compelled to share.”  His material this time is his own life, as he mines it for some smiles and a couple of guffaws. He was not the best writer in his MFA program, and he resisted as long as he could his material — small-town, upstate New York, where he came from.

While sharing some of the stuff he thinks is humorous, he even uses a line from a well-known movie to make his point, and make us laugh (no spoiler here!). He’s a parent, and he gives the commencement address at his daughter’s college, where he reads out RUSSO’S RULES OF LIFE. #3: “Have children. After what you’ve put your parents through, you deserve children of your own.”  He gives us a down-to-earth perspective on his career by explaining how, as he earned more money through his writing, he moved from writing in the basement to a room on the second floor, with a view.

It’s in this room where we meet the second Richard Russo, the astute commentator on art and writing. He moves us into this room, as he moves us into his past, to let us see what he sees. The window overlooks a tombstone leaning against a tree, an object that came with the house. One day, as the upstairs bathroom is being redone, a commode appears next to the tombstone. And he does what a writer should do —he pauses to look at it, and then shows us why that’s funny.

In another lengthy essay, he uses his grandfather’s involvement with the glove makers’ guild back in upstate New York, and then with the unions, to help him illustrate his own experience as a successful writer. Also a member of both a guild and a union, he illuminates the difference between art and craft, which he then extends to a contrast between print writers and e-writers who print only digitally. His arguments are at once well crafted — and artful.

He includes two essays calling our attention to the finer points of Dickens and Mark Twain, in case we missed them, and a lengthy piece extolling the virtues of “omniscience” in narration. This is the barefaced second Richard Russo, and if you came to the book expecting just the first one, you may find this a bit of a slog. But if you just like Richard Russo, period, you will enjoy every minute of this small volume.

This entry was posted in Essays, Uncategorized and tagged Essays, Richard Russo, Writing about writing. Bookmark the permalink.