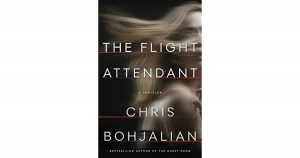 Chris Bohjalian is one of my favorite contemporary authors, not only because he’s a good writer, but also because his books are so diverse. I have not read all his 20 novels, but I’ve enjoyed every one I have come across. He cannot be accused of formulaic writing.

This one is an up-to-the-minute story that fits more or less into the broad thriller/suspense/mystery genre. It’s also a book that ultimately addresses questions as to whether some people are beyond redemption.

This is the story of Cassandra Bowden, a flight attendant with a major airline. Cassie, we quickly learn, has a serious drinking problem. She’s nearing 40, still good looking, still able to do her job, but she frequently drinks to the point of blacking out, and she often wakes up hung over, in bed with a strange man, or trying to recall what went on with a man who’s no longer in evidence. Often, she’s disgusted with herself, but not enough to change her ways.

Cassie seems to be heading for disaster, and hardly has this book begun than she finds it. She wakes up in a hotel room in Dubai that’s not the one the airline booked for its crew. Fighting her headache and other consequences of the previous night’s excesses, she looks at the man in bed beside her – and finds that he’s dead, his throat cut, blood everywhere.

What to do? There’s no way Cassie wants to wind up in jail in Dubai, or even dealing with the legal system there, so she begins what will become a spiraling pattern of cover-up and lies.

At several points, she considers admitting what’s happened, calling the U.S. Embassy, doing something that most people would consider right. But always, she talks herself out of it.

She’s not even really sure that she didn’t kill the man herself, and if she didn’t, who did? And why did the murderer spare her?

But things keep getting more complicated, more ominous, and soon she’s seeking the help of a lawyer.

There’s more to Cassie’s self-destructive behavior than just binge drinking and sleeping around, however. Sometimes, even when sober, she makes reckless decisions and does what seems like the worst possible thing.

Soon, she’s exasperating her lawyer and others who try to help her, and in the process, she exasperates the reader, too.

I sometimes have trouble sticking with a book in which I don’t much care for or about the protagonist, and I began to think I might abandon Cassie and her story.

Even Bohjalian doesn’t seem to like her much, and he, too, seems impatient with her. She’s a drunk, a liar and a petty thief without a lot of redeeming qualities, although she does genuinely care about her sister’s children and the stray cats at the animal shelter.

But Bohjalian is a very good writer, and there was always something there – the mystery, what would happen, what was really going on – to keep me going. There’s the Russian factor: Who is this woman calling herself Miranda who showed up at the hotel room during the drunken night before the murder, and who is Viktor? What was the man Cassie found dead in bed with her really doing?

Is Cassie right to think she’s being watched and followed in New York?

In the end, I was glad I’d kept going. Bohjalian accomplishes the feat of delivering more than one twist that will have your head reeling, even as you say, “Of course.”

The audio version makes good use of three readers, one for Cassie’s parts of the story, one for those seen through the eyes of “Miranda,” and one for the FBI reports. In spite of yourself, in spite of Cassie, the story draws you in.

This is not one of my favorites of Bohjalian’s many accomplished novels, but it’s certainly one that’s worth a listen or a read.