Did you know it’s only a few days until the major league baseball teams start spring training? Tom Dillon is well aware that it’s almost time for a new baseball season, so he figures it’s also time for a review of a new baseball book. 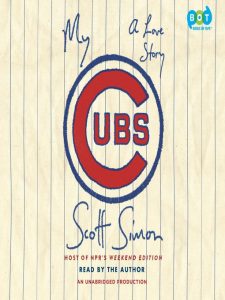 This isn’t really a book. There is no table of contents, there aren’t any chapters, there’s no index, and you can read the whole thing in a couple of hours sitting in the doctor’s office or at the barber shop or maybe even in a bar – which might be the most appropriate place to do it.

There are also a good number of f-bombs you’ll have to negotiate, and there’s a syrupy sentimentality that may turn you off if you’re not a Chicago Cubs fan.

But baseball season has to start with some sort of book, and this is the only one that’s come across my desk so far this winter. It may also give some hope to the perennial losers among us. Maybe Wake Forest University basketball fans can get something out of it.

It’s basically an appreciation of the Chicago Cubs baseball team and all they went through over 108 years of losing before they finally won the World Series in 2016. It’s told through the personal and family memories of Chicago native Scott Simon, a National Public Radio broadcaster who clearly lives – and dies – with his team.

He’s had family ties with a lot of Cubs people, including the late manager Charlie Grimm and a few broadcasters. He’s eaten at the Billy Goat Tavern, whose owner put that supposed curse on the team all those years ago. He knows where bodies are buried – or at least where a few people’s ashes have been scattered. (Hint: It’s near first base.)

He’s thrown out the first pitch to start a game at least a couple of times, an angst-inducing experience. (Don’t miss the part with the yoga teacher.) And his family—wife and two daughters — are apparently just as mad about the team as he is.

He’s really a pretty good storyteller, as will become clear only a few pages in during an encounter with Santa Claus. And no matter what you may think, he has some sort of jaded weird perspective about this slice of life and baseball.

As he put it somewhere early on, there’s no comparing the Cubs with the Titanic or the Hindenburg. Many lives were lost in those disasters, and besides, they only sank once. The Cubs sank nearly every year for 108 years.

Simon has a passing knowledge of poetry, which will be clear as he twists the work of Allen Ginsburg and Rudyard Kipling, among others, into paeans – or maybe it’s pains – to Chicago baseball.

And he has a lot of trivia at his command. Did you know that Bill Buckner, the Boston Red Sox first baseman who let that grounder go between his legs in 1986, had just been traded from the Cubs to the Red Sox?

Simon is a serious journalist, despite these comments. He has eight books to his credit, including the bestseller Unforgettable, and he’s won broadcasting awards that include the Peabody and Emmy.

He also has a serious part toward the end of this book, where he comments about the Chicago murder rate. “I am sickened by Chicago’s homicide crisis, and appalled by attempts to politicize it,” he says. Yes, that means you, Donald Trump.

But Simon’s book is at heart what the slipcover says it is, a “portrayal of paradise lost and found.” And it tells a good story succinctly. So now, let’s play baseball.