Waiting for the gun

Bob Moyer’s New Year’s resolution is to review more books even when he’s on the road, as he often is. He just doesn’t know about this resolution yet, but one hopes he will after reading this post. 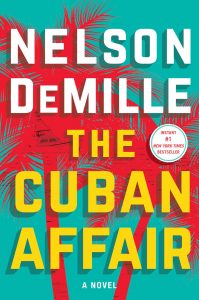 Looking for a book where you can dive into the action with the leathered hero, following him through adrenaline-soaked, body-filled pages until you both emerge, exhausted but fulfilled, with the partner of your choice and righteousness by your side?

Sorry, this is not that book.

Author Nelson DeMille takes so much time to bring The Cuban Affair to a climax that his narrative may qualify as the longest literary foreplay of 2017. It begins when three Cuban Americans come on to Mac to help them with a multi-million dollar project. They want to get millions of dollars and documents in 11 trunks out of Cuba. They need him for his boat and his body — he’s a veteran field officer who served in “Allfuckedupestan” and can handle himself and others in hostile situations. The plan is simple — the boat enters a fishing competition in Cuba with Mac’s first mate as captain. Mac, in the meantime, pretends to become a couple with the woman in the trio on an educational tour sponsored by Yale. Mac can’t turn down the offer, because it looked like “Sex, money, and adventure.”

When they get to Havana, the mock affair intimated in the double entendre title runs amok, while the clandestine affair turns into a tame tour of present landmarks and past crimes of the Castro regime. The only sparks in the narrative are the frequent witticisms offered by Mac.

Then, his first mate meets him on shore and gives him a gun. Now, there’s a rule in both mystery fiction and the theater that if you bring a gun onstage, you have to use it — because everyone is waiting for just that. Sure enough, this gun is hidden in the room, stowed in a waistpack, stuck in a waistband, dropped over a wall, while we are waiting for it to be fired. For hundreds of pages. Meanwhile,  “ ‘The best laid schemes o’ mice and men gang aft a-gley,’ “ meaning, according to Mac, “ ’This shit’s not working.’ ” As they make their way off the island, the gun is finally fired on page 374, relieving all that built-up tension.

Unfortunately, there’s not much pop to the conclusion; there’s more powder in the pistol and AK-47’s than there is in the plot, and we are left relatively unsatisfied by The Cuban Affair.