The power of faith unites a power couple

Residents of the Piedmont Triad take note: The authors of this book will be coming to Winston-Salem Saturday, April 2, for a “conversation” sponsored by the BookMarks organization, with support from Centenary United Methodist Church.  Expect a lively exchange about politics from the view of two people in the know, as well as about marriage and religion. 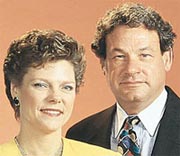 Cokie and Steve Roberts are an unusual couple in many ways.  They are a power couple – both have long had high-profile jobs. Cokie is a senior news analyst for NPR, where she was the congressional reporter for years. She’s also a political commentator for ABC News. She has a string of broadcast awards. Steve’s news career is equally impressive, including long stints at The New York Times and U.S. News, and he’s a professor of media and public affairs at The George Washington University.

Add to that: They collaborate. Together, they write a popular, nationally syndicated newspaper column. Both are successful authors separately, and they collaborated on an account of their long and happy marriage in the book From This Day Forward, published in 2000. That book became a bestseller.

As if it weren’t unusual enough that such a power couple has managed to sustain a marriage over 45 years now – and work together – add in the fact that it was a marriage that a lot of people thought was doomed from the start. Cokie, the daughter of two longtime Louisiana congressmen (talk about power couples) – Hale Boggs and, after his death, Lindy Boggs – was a devout, practicing Roman Catholic. And Steve was Jewish, raised in a family that expressed its heritage more in social and political ways than in formal religion, but that felt its Jewish identity strongly nonetheless.

From This Day Forward deals, among other things, with how they dealt with their different faiths in their marriage and while rearing their children.

Now their new book, Our Haggadah, delves further into the subject of their interfaith marriage, and offers specifics about how their family developed its own traditions for celebrating their annual Passover Seder, which has become a Washington event. The Haggadah is the text that is read at the Seder; Cokie wrote the Roberts’ family’s text herself, drawing on others and incorporating their own faith and perspectives. Steve’s family had never celebrated the Seder until Cokie requested that they do so.

The book includes introductions by both Steve and Cokie. Steve’s is partly memoir about how he came to embrace his Jewish faith as well as his heritage. Cokie’s focuses more on how the family, led by her determination, developed its particular traditions. As Steve says, “You don’t have to be Jewish to love our Seder, or any Seder. The core message of Passover – its celebration of human freedom – transcends ethnic identity.

The book also offers practical suggestions for staging a Seder, as well as the text of the Roberts family Haggadah, songs to be sung, and Cokie’s recipes.

That conversation in Winston-Salem should be lively. It will be at 7:30 April 2 at Centenary United Methodist Church. Admission is by ticket only. For more information, visit the Bookmarks website at http://www.bookmarksbookfestival.org/