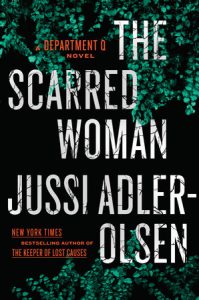 Only recently have I become aware of some of the fine mystery/detective fiction coming out of Scandinavia. Bob Moyer introduced me to the fiction of Norway’s Jo Nesbo, and that rewarding experience encouraged me to try this latest novel by Denmark’s leading crime writer, Jussi Adler-Olsen. One of these days, I’ll have to read the novels of Sweden’s literary star, the late Stieg Larsson.

The Scarred Woman is the seventh in Adler-Olsen’s Department Q series, which are highly popular in Denmark as books and movies. Not having read any of the previous books did not prevent me from becoming thoroughly caught up in this one, but it did make me want to turn to the earlier ones to catch up on the history. The lead detective is Carl Morck, who because of some of that history has been more or less banished to the basement of Copenhagen’s police headquarters, where he and a few dedicated colleagues work to solve cold cases. When budget problems threaten the very existence of their department, Carl and company are determined to make themselves indispensable.

Noting strong similarities between the recent murder of a woman in a park with an unsolved case a decade earlier, they begin looking for possible connections. Meanwhile, they’ve been ordered to let the star of a TV true-crime documentary show follow them around, much to Carl’s displeasure.

While all this is going on, a serial killer seems to be targeting young women who dabble in prostitution and other unsavory behaviors while living on welfare. We know, but the police do not, that their executioner is Anne-Line Svendsen, their social worker. Having apparently survived a nearly fatal cancer, Anne-Line is determined to rid the world of what she views as worthless young women.

What Anne-Line doesn’t know is that some of these young women are as criminally inclined as she is. Before long, it’s becoming tough to tell who’s the hunter and who’s the hunted.

As if all this weren’t enough, Rose Knudsen, a beloved part of the Department Q team, seems to be headed for a complete mental and emotional breakdown that could lead to suicide. Frantically, the team tries to figure out what in Rose’s past is prompting her self-destructive behavior.

The reader (or listener, if you’re enjoying the fine audio version) begins to see how all these threads are linked well before the police do. That knowledge heightens the suspense and tension. Will Carl and crew figure things out before it’s too late?

Like other Scandinavian crime fiction, this book is often as dark and chilling as an arctic winter. The grim portrayal of so many unsavory women is as striking as it is unusual, and it’s all an interesting commentary on the pitfalls of Denmark’s social welfare state. But the sometimes-grim tale is leavened by a good dose of humanity and even some welcome humor.

Graeme Malcolm does a fine job of reading the audio version, and despite the number of characters and plots, the narrative is both easy to follow and intensely compelling.

One Response to Something’s rotten in Denmark…