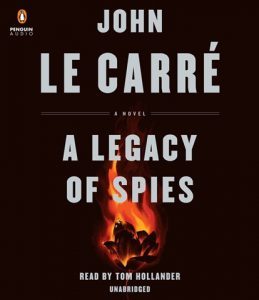 Could it be? With word that John le Carre had written another novel, and this one bringing back George Smiley after many years of absence, legions of fans hoped that the master spy writer, now 86, still has his magic touch.

The answer, of course, is yes. A Legacy of Spies is another masterful work of literature – his books are never “just” spy stories – from one of the most thoughtful and gifted writers of the last century and this one.

As the story begins, Peter Guillam, who worked closely for and with Smiley, receives an unwelcome letter from their longtime employer, the British Secret Service. Peter has been living quietly in retirement on his family’s farm in Brittany, trying not to think much about his career, but now he’s being ordered to come to London.

It seems that, much as Peter might like to leave the past behind, others have a different idea. He finds himself being interrogated about some of operations he was involved with years earlier, operations that are even more difficult to explain now that the Cold War is over. People who had no experience of the Cold War and its prevailing sense that sometimes, the ends did justify the means, are asking questions that Peter would rather not think about, much less answer.

Deftly, le Carre moves between the present and the past, so that we gradually learn more about both what happened years earlier and what transpires as Peter deals with this intrusion.

This book revisits events le Carre chronicled in two of his most popular books: The Spy Who Came in From the Cold and Tinker, Tailor, Soldier, Spy. It’s a testament to the nuances and depths of le Carre’s works that he can give us such intriguing new insight into what happened back then. It’s not necessary to have read those previous books to enjoy this new one, but for those who haven’t, it’s probably a good idea to read the earlier ones first. Reading this one will no doubt make you want to find those, and that way you’ll be able to appreciate them without already knowing what’s revealed in Legacy.

This relatively short book doesn’t have a great deal of physical action, but there’s all the suspense, mystery and intrigue of any good le Carre tale. Smiley doesn’t appear as much as we might perhaps hope, but he’s always there, fittingly, in the shadows.

Part of the genius of le Carre’s books has always been the tension between the morality and humanity of his characters and the jobs that they take on. How far are they willing to go, how far must they go to do what should be done? Is what they are trying to accomplish even the right thing? And what toll do their actions take on their souls? They know better than anyone that things are not always – even often – clear cut, black and white.

Now we see these complex characters in their later years, with more time to reflect and relive.