At the intersection of nature and imagination

It’s always a pleasure to have a review from Tom Dillon, who draws attention to books I might otherwise miss. 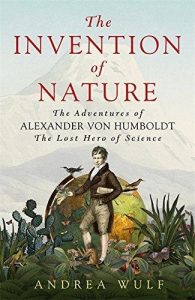 Be honest, now. Who was Alexander von Humboldt? Do you know? The chances are, if you have been living in 20th and 21st century America, you don’t. He may be memorialized in things like the Humboldt Current running up the coast of Chile and Peru, dozens of parks and monuments and mountains in Latin America and more than 100 animals. Indeed, the state of Nevada was almost named for him. But for too many, he’s been forgotten.

It’s fair to say, says Andrea Wulf in this absorbing 2016 book, that the peripatetic German scientist and explorer is responsible for our concept of nature itself. He was a mentor for such people as Charles Darwin, Henry David Thoreau, Ernst Haeckel, John Muir and others. Go look at “The Andes of Ecuador,” Frederic Church’s marvelous painting at Winston-Salem’s Reynolda House, and you’ll be looking at the work of another person inspired by Humboldt.

In the 19th and early 20th centuries – Humboldt lived from 1769 to 1859 – he was probably the best-known scientist and explorer in the world, breaking new trails in the South American rain forest, climbing to heights unknown on Ecuador’s Chimborazo volcano – then thought to be the tallest mountain in the world – and influencing people as diverse as Thomas Jefferson and Simon Bolivar.

But Humboldt was German, and things German fell out of favor in much of the West in the early 20th century. “Both world wars of the 20th century cast long shadows,” Wulf writes, “and neither Britain nor America were places for the celebration of a great German mind anymore.” In Cleveland in 1917, German books were burned in a public bonfire – where 50 years earlier thousands had marched in celebration of Humboldt’s centennial.

So why should we care? Well, Wulf says, partly because Humboldt’s life was colorful and “packed with adventure.” He was one of the first explorers of Latin and South America and later traveled far across Russia, longing to reach the Himalaya. But more than that, she says, Humboldt’s writings blurred the line between science and the arts. He could talk to both farmers and scientists.

“Humboldt’s insight that we can only truly understand nature by using our imagination makes him a visionary,” Wulf writes. “Environmentalists, ecologists and nature writers today remain firmly rooted in Humboldt’s vision – although many have never heard of him.” She calls Humboldt their “founding father.”

Humboldt and his brother, Wilhelm, were born to an aristocratic Prussian family but had an unhappy childhood after their father’s early death. Both boys were tutored by a string of Enlightenment thinkers who taught them a love or truth, liberty and knowledge, but their mother expected them to become civil servants, a future that agreed with Wilhelm but frustrated Alexander.

Alexander took a job as a mining inspector, but on his mother’s death began planning with a young French scientist, Aime Bonpland, for a voyage to South America. They were eventually able to get permission from Spain to visit its colonies, and in 1799 set sail for what today is known as Venezuela – then New Andalusia.

That was the start of five eventful years during which Humboldt and Bonpland explored the rain forests, established a connection between the Orinoco and Amazon river basins, climbed mountains and eventually made it to Peru, Mexico, Cuba and the new United States, where Humboldt found a kindred spirit in President Thomas Jefferson. His writings about all this made his international reputation among both scientists and the reading public in Europe.

Humboldt’s Personal Narrative of his travels attracted immediate attention in Europe and was eventually followed by dozens of other books, papers and articles, culminating in his publication of his five-volume Cosmos: Sketch of a Physical Description of the Universe, in 1845. The first two volumes were huge best sellers and by 1851 had been translated into 10 languages.

This book is a follow-up to Andrea Wulf’s Founding Gardeners and The Brother Gardeners, about the interest in the natural world among America’s founders. And while it takes Wulf in a new direction, it features the same seemingly effortless writing and fine attention to detail. It’s fair to say that the sections on Humboldt’s travels are by far the most interesting part of the book.  But it’s all very readable.

Humboldt could perhaps captivate others as he captivated John Muir, who wrote at the start of his own travels, “How intensely I desire to be a Humboldt,” desperate to see the “snow-capped Andes and the flowers of the Equator.”