Steve Wishnevsky of Winston-Salem has unearthed a gem from a few years back.

LAMB: The Gospel According to Biff, Christ’s Childhood Pal. By Christopher Moore. Harper, 2002. Available in various hardback and paperback editions. 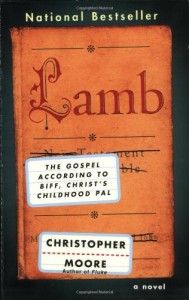 One of those books. Quite mad, and rather sane, a parable of parables, or a satire of satires, so convoluted with logic traps, it turns around and vanishes up its own output with a “poinct,” like the fabled Oozlum bird. What can you say?

Eli, known as Biff, and his best friend, Joshua, are fairly normal small-town Jewish boys; well, normal except that Josh seems to be able to raise the dead, and sometimes his image will appear on every loaf of bread in Nazareth. Stuff. This all causes talk. Then, prompted by a double broken heart, caused when the lovely Mary of Magdala is obliged to wed a Sadducee, the two boys decide to seek fulfillment, and maybe a girl or two, elsewhere. Their only clue – or clues – resides in the names of the three wise men who brought gifts to Joshua’s birthing.

Nothing like a plan. So off they go, wending their ironic ways to Tibet, fabled Hind, and Imperial China. Along the way, Biff creates a Hebrew boy martial art, Jewdo, discovers the secrets of the yeti, tangles with devotees of Kali, and has diverse other adventures, none of which prepare him for the fate Joshua must accept when they return to Israel.

But you know all that. Another layer or two of refracted irony occurs when a strangely inefficient angel reincarnates poor Biff in a modern-day hotel room so that he may write his own gospel, the very book you are reading to glean all this wisdom.

Thorne Smith, Mark Twain, Tom Robbins, Christopher Moore, Carl Hiaasen. American literature is blessed with so many wise men, so able to sugar coat the bitterness of their wisdom with humor. One could easily denote Moore as the heir to Mark Twain, except for one tiny detail. That little stumbling block is a guy in England who writes beyond the capacity of any normal human creature. I am writing about Terry Pratchett, of course.

But Christopher Moore is well up in the pantheon, I guarantee. Sometimes you have to tell a joke to tell the truth, lest it hurt too much to bear. This book is one of those sometimes.

This entry was posted in Contemporary literary fiction. Bookmark the permalink.