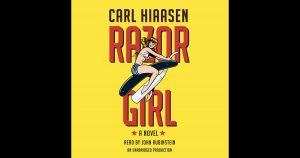 Razor Girl is Carl Hiaasen at his hilarious best, and that is very, very good. It’s wacky fiction that’s somehow crazily connected to reality. It’s absurd but in a way that’s a whole lot like the world we live in. It’s fact paced, yet every now and then you realize, maybe while you’re catching your breath and moving on to the next escapade, that Hiaasen has sneaked in a moment of genuine sentiment or even a bit of a message. You couldn’t make this stuff up, folks would say if it happened in “real life” – and yet, Hiaasen does.

It all starts when Lane Coolman, a Hollywood talent agent, is driving down the Florida Keys to meet Buck Nance, the reality TV star who is his biggest client. Suddenly Coolman’s rental car is rear-ended, and thus begins an improbable chain of events. The offending driver is Merry Mansfield, and, it seems, she was distracted by her last-minute grooming efforts on a normally personal and private part of her anatomy. Yes, she’s the Razor Girl of title fame.

Why, one might wonder, would Merry have targeted Coolman in her creative scam? That’s a good question, and one that quickly becomes an important part of the plot

Another key character is Martin Trebeaux, aka the sand man, owner of Sedimental Journeys, a company that until now has seemed to have a bright, even never-ending future, as it steals sand from one South Florida beach to sell it to another, only to see the new beach erode and the cycle begin anew.

Then we have Big Noogie, of New York Mafia fame. And John I and John II, the fake service dogs.

Oh, and don’t forget Buck Nance, aka Captain Cock, star of a “reality” show not unlike “Duck Dynasty” but set in the Florida panhandle and involving the raising of roosters whose tail feathers are used in high-end (pun intended, sorry) fishing flies. Without Coolman to keep him under control, Nance (who is really an accordion player from Wisconsin) gets into some serious trouble. Enter Blister, a thoroughly disgusting character who has taken the “reality” of Captain Cock and his supposed life and philosophy way further than Buck Nance ever envisioned.

Into all this mess insert Andrew Yancy, the disgraced former police detective turned food inspector (roach patrol) who first appeared in Hiaasen’s Bad Monkey three years ago. As always, Yancy is trying to discourage any building on the lot next to his house, because he doesn’t want his glorious view obstructed. The threat this time is posed by Brock Richardson, a slick lawyer from Miami who makes his fortune with TV ads pushing product-liability suits. Unfortunately, he himself has gotten hooked on the product in his latest big case, a combination deodorant and testosterone wipe with side effects that are truly horrifying.

In addition to going to considerable (and sometimes illegal) lengths to protect his view, a priceless luxury in over-developed South Florida, Yancy is always vainly campaigning to be reinstated as a detective. Tracking down Coolman, Captain Cock and Blister, who become entangled in unexpected ways, seems to him a way to prove his merit and also a task that simply needs to be done.

Did I mention that Yancy is going through a romantic crisis with his girlfriend
Rosa, who used to work as a coroner and now handles at least temporarily living patients in an emergency room? Or that Merry Mansfield keeps crashing the scene (literally)?

Incredibly, Hiaasen ties all these crazy characters and situations together in a story that makes an odd kind of sense. It’s a wild ride, but you’ll be glad you were along. Just keep your seatbelt fastened and watch how the bad guys are served up their just deserts.

If you choose to enjoy this tale as an audio book, John Rubinstein does a great job keeping a metaphorically straight face while relating madcap events. And if you listen to it, as I did, while driving, don’t be surprised if your eyes keep checking your rear-view mirror.