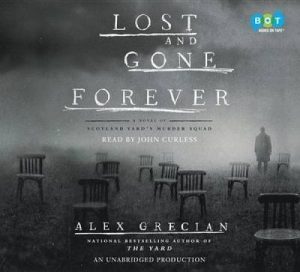 When reviewing the newest book in a series, I usually try to judge whether someone who hasn’t read all the earlier entries will understand and appreciate the new one. This time, I really did approach Lost and Gone Forever with very little background. I had read one of Alex Grecian’s Scotland Yard Murder Squad books, The Black Country, No. 2. But, unlike in the other books, Jack the Ripper does not figure prominently in that one.

I can report that while not having read the earlier books will put the reader/listener at something of a disadvantage, the disadvantage is not insurmountable. There was a moment while listening to Disc 1 that I almost gave up, both because I lacked a lot of the history and because the story begins in a way that is dark, even grim. But before I could hit the “eject” button, I was so engrossed in what was happening that I forgot I’d ever had such a notion.

My solution to the problem of not having read most of the previous four books in the Scotland Yard Murder Squad series is now simple: Having enjoyed No. 5, I hope to do the same with the earlier ones. Those who are already fans of the series won’t need to read reviews; they need only to know there’s a new book for their reading pleasure.

This is a historical book as well as a thriller, and Grecian does a superb job of drawing the reader into the world of Victorian England, particularly the darker side of that world. The murder squad, hampered by a shortage of resources and manpower, has been unable to stop the serial killer known as Jack. No matter what happens, Jack seems to reappear and resume his murderous ways. He’s a clever and crafty villain as well as a ruthless one.

As this book opens, Walter Day, one of the murder squad detectives, has been missing for a year. Some rumors have it that Jack the Ripper might be involved in Day’s disappearance, although no one has been able to determine the truth of the matter, or even why Jack might want Day. Day’s wife has been struggling to keep their family going.

Nevil Hammersmith, Day’s friend and protégé, has lost his job with the squad because he is too headstrong. Hammersmith has set up a detective agency, but the only case he pursues is that of his missing mentor. He is determined to find Walter Day.

Then various people begin reporting that they have seen someone who greatly resembles Day in London. If Day has really returned, why doesn’t he get in touch with his wife, or Hammersmith or the Murder Squad? As viewpoints shift, we sometimes see matters through Day’s eyes, and as he gradually realizes what has happened and is happening, readers also gain more understanding.

Meanwhile, a husband-wife team of assassins for hire arrives in London with a mysterious mission. The more we learn about them, the more they seem as frightening as Jack himself. And there are the Karstphanomen, members of a secret society of prominent Londoners that operates outside normal legal channels.

Grecian does a fine job of depicting the gritty side of 1891 London. He also creates characters with considerable depth, women as well as men. Both those on the side of law and order and the villains in this book are all the more fascinating because of their complexities – and sometimes we wonder who falls into which category.