Down on the street

Reed Farrel Coleman, an established master of the hard-boiled detective genre, has a novel out that’s billed as the start of a new series, about Gus Murphy, a retired cop in Suffolk County, N.Y. Bob Moyer, an established fan of noir books, finds it a promising beginning. 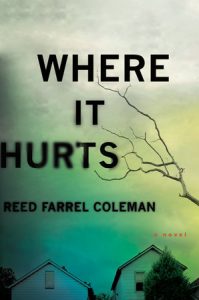 Reed Farrell Coleman sure knows his way around Long Island.  Whenever he heads out, ex-cop Gus Murphy travels through a detailed landscape that gives context to his search for answers.  “Right around where Union Avenue turns into Long Island Avenue is one of those ugly patches we Long Islanders like to pretend don’t exist … where the dirty work gets done by brown-skinned men,” and Gus gets shot. He stops to talk to the owner of Harrigan’s Bar, where the “mutts” at the bar “…never know if the next guy coming though the door was there to collect on their debts or to extract late fees … as much matters of skin and bone as dollars and cents.”  A Christmas Santa mooning passersby on a neighboring roof illuminates an empty lot where T.J. Delcamino’s body was dumped.

The author’s Long Island is “…a place of demarcations:  some subtle and gradual, some obvious and ugly,” and a place that lets him demonstrate something else:  Coleman sure knows his way around the hard-boiled genre.

Gus drives a shuttle van for an airport motel people didn’t come to to stay, they “…came here to leave.” His career, his family, his life, all fractured by the unexpected death of his son, he lives in that limbo Where It Hurts.  Until Tommy Delcamino comes along, and shakes Gus “…from (his) grief-stricken sleepwalk.”  When Tommy asks him to look into the death of his son TJ, Gus turns him down at first.  When he decides to talk to Tommy about it, he finds his body — and a bullet for himself.  That’s when the gumshoe hits the ground.

Gus gets shoved around, shot at again, and shunted off even by his old police buddies, letting him know somebody doesn’t want him snooping around.  In true fashion of the genre, that intent only increases Gus’ intent.  He gets a light back in his eye, and then hits that point in any good Private Eye book, when “a flurry of images … flashed through my head.  And suddenly things had fallen into place.”

Coleman takes us “…down on the street where the violence and dark magic was done,” and brings both the reader and Gus back into the light with more answers than when we started.

This entry was posted in Detective fiction, Mysteries. Bookmark the permalink.