My partner for this review is my younger son, a U.S. Navy officer who has served two deployments aboard Navy ships and is now an instructor in seamanship and navigation at the U.S. Naval Academy in Annapolis. 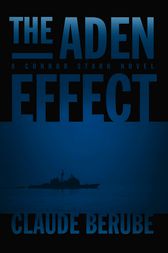 This novel, first published in 2012, is a great find for fans of contemporary thrillers, especially those having to do with the military and international affairs. It’s a special treat for those who are interested in America’s Navy and modern adventures at sea.

The Aden Effect is great find for two main reasons: One, this is a good read, well written, fast moving, tightly plotted, intelligent and with engaging characters and plenty of action. Two: It’s the first of a series, and the second one is already in print. (A review of No. 2 will be coming soon.)

The author, Claude Berube, knows his material. He’s taught history at the Naval Academy, where he heads the Naval Academy Museum (if you haven’t visited the museum, you should). He’s worked for the office of Naval Intelligence and on Capitol Hill, and he has deployed to the Persian Gulf as an officer in the Navy Reserve.

He also has a good imagination, and he’s a fine writer.

Berube’s book is as up to date as today’s headlines. As the book opens, pirates are terrorizing the seas off the Horn of Africa, and the U.S. and other navies have their hands full trying to protect international shipping.

C.J. Sumner, who recently took over as the U.S. ambassador to Yemen, is under pressure from Washington to negotiate access to oil fields on the island of Socotra and to persuade the Yemenis to help in the fight against the pirates. Finding the going tough, C.J. decides to press an old friend into service to help her. That old friend is Connor Stark, a former naval officer who, after a dishonorable discharge, has become a mercenary living in Scotland, where he’s tentatively beginning to make a new life for himself.

Sumner needs someone who can get things done, and someone who knows the dangerous area in which she is working. She believes that her old friend Stark is her man, so she pulls strings to have him recalled to active duty as her defense attaché. Stark isn’t happy about this interruption to his new life, but he answers the call. We don’t know the details of why Stark was kicked out of the Navy, but as the story develops, we begin to get some hints.

Things, of course, are never quite what they seem, and Berube introduces plenty of complications into this tightly packed story. Back in the United States, Daniel Golzari, a Diplomatic Security Agent, finds more than he expects when looking into the death of a college student in New England who was the son of a State Department official. Golzari uncovers an illegal trade in khat among Somali refugees, with some ruthlessly murderous people involved.

Golzari’s investigation leads him to a Yemeni shipping company owned by a prominent member of the ruling family, someone with whom Stark is working.

When Golzari and Stark butt heads in the course of their separate missions, they immediately dislike each other. But events force them to work together, however unwillingly.

Berube deftly works a lot of action into this relatively slim novel, including sea battles with pirates and a rescue by a U.S. Navy ship whose crew is struggling under a questionable captain.

The plot, too, is intricate, with the mingled investigations leading to unexpected places.

The action, plot, well-described setting and interesting characters – including some of the Navy personnel – would make for an entertaining read on their own. The book is also rich with pressing international issues, such as China’s efforts to assert dominance in the region, piracy, the drug trade, competition for oil, and political corruption.

And the book has something else that lifts it above most other thrillers: thoughtful questions about right and wrong, justice and legality, and when breaking or at least bending the rules might be the most patriotic and moral course of action. For all its action and intrigue, this is a book with depth. Reading it brings to mind the work of another thriller author whose work was first published by the Naval Institute Press: Tom Clancy.

Berube handles his material well, without letting the intricacies and details slow the plot. His depictions of what happens on a U.S. Navy ship are, for the most part, spot on. He uses quite a few Navy acronyms and other terms, but usually does a pretty good job of giving enough explanation to help out the landlubbers among his readers.

The story leaves us ready for the next adventure, and, fortunately, that book is already available. Stay tuned for the next review.