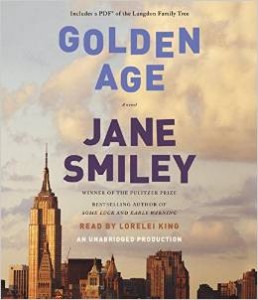 If you’ve read the first two volumes of Jane Smiley’s Last Hundred Years trilogy, which, by all accounts I’ve found, are masterpieces, all you need to know about this last novel in the series is that it’s a worthy conclusion.

But if you haven’t read those earlier books and have the same question I did, here’s my answer: No, it is not absolutely necessary to have read the previous novels in the trilogy to enjoy and appreciate this book. But now that I’ve read (or in my case, listened to) this one, I definitely want to read the two that came before.

So, it’s possible to enjoy this one first. But … Yes, I’m sure it would be better, if one has the opportunity, to read the books in order.  These books are the story of the Langdons, an Iowa farm family, beginning at the dawn of the 20th century. Although Smiley skillfully works in enough family history and heritage to make this novel stand sufficiently on its own, having watched the family grow, change and disperse over the decades would make the reading experience richer.

Those who listen to the audio book have an added handicap. I almost gave up after a chapter or two, despite Lorelei King’s excellent reading, because I was having trouble figuring out who the various characters/family members were. Trying to keep everyone straight was about as confusing as walking into somebody else’s reunion. I’ll admit to having cheated a bit: I also had a print copy of the novel, and I consulted the family tree helpfully included in the front. Which brings up a point for those who publish audiobooks: If the publishers of a printed novel think a family tree or list of main characters is useful, that information would probably be even more useful for someone who is listening to the audio version. Wouldn’t it be great if the family tree could have been tucked into the package along with the CDs, or made easily available online? ((I’ve looked, but found only the brief one from the first volume, Some Luck, when the family was much smaller.)

A brief glance at the family tree in the novel enabled me to hang with the audio book until the main characters began to emerge both as individuals and as members of the extended family. Before long, I was thoroughly captivated by the story, having abandoned all thoughts of giving up.

As those who have read the earlier books no doubt know, these are epic novels, masterfully capturing the broad sweep of American history through the lives of the Langdons. Smiley does a marvelous job of working in historical events and trends – wars, the Sept. 11 attacks, elections, economic booms and busts, political crises, growing awareness of global warming and other environmental problems, and societal changes such as attitudes about sexual preferences and behaviors. For someone who’s a contemporary of some of the older characters in this book, reading this story is like seeing one’s own life put into historical context. Yes, I found myself saying, that is what happened, and that is how it affected me or someone I know. It helps that many of Smiley’s characters are intelligent and thoughtful, raising good questions and reflecting insightfully on their own lives and their changing world.

Golden Age begins in 1987, moves through the end of that century, into the 21st century and forward to 2019 and Smiley’s sobering ideas about what lies just ahead. As families do, many of the Langdons have ventured far from the Iowa farm, to places such as New York, Washington and California, and some have prominent roles in important events.

Though the book is in many ways a rich and insightful record of the period it covers, the personal stories never take a back seat to the broader sweep of history. Fittingly for the last book in the trilogy, it includes several stories of aging and death, yet most of these elements serve to make the story comforting and uplifting more than depressing or negative. We also get to know and care about several members of the younger generation.

If you haven’t read Some Luck and Early Warning, seek them out. Then read or listen to Golden Age. Jane Smiley has managed to tell fascinating stories while giving us a wise perspective on our times and those of our parents and grandparents. This is a wonderful book.