Tom Dillon put off reading this book for quite a while, but after he picked it up, he was glad he did. 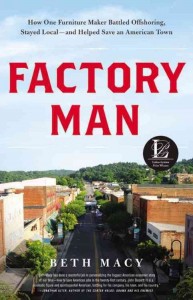 You know that bricked-up abandoned factory down the street, the one you remember from the golden days of manufacturing, the one where so many of your family members worked, the one that eventually had to close because it couldn’t fight all the imports from abroad?

You remember how unjust you thought it was, all those people getting thrown out of work because of the North American Free Trade Act or the Chinese competition and all that?

Well, it may come as something of a surprise, but all that didn’t have to happen. If the folks who owned that factory had fought hard enough and scrapped the way their forebears had to decades and even centuries ago, they might have won. That plant might still be operating.

This book proves it. It’s the story of John D. Bassett III, scion of a Virginia furniture manufacturing family, and his fight to preserve and keep operating Vaughan-Bassett Furniture Factory in Galax, Va. – the last of a string of dozens of furniture factories across southern Virginia.

It tells how Bassett was pushed out of larger family-owned mills, then took over leadership of much smaller Vaughan-Bassett, and then fought off Asian competition to the point that his mill is still, today, a going thing, and John Bassett III is something of a folk hero to people in southern Virginia.

But the book also does something else: It puts faces on the victims of globalization, particularly in the down-on-their-luck towns of Bassett and Martinsville, Va. And it puts a bit of the lie to those economists who have argued that manufacturing can’t survive in America today.

Macy is a reporter for the Roanoke, Va., Times, who was tasked by her editors with telling the human side of the globalization story. But then she heard about John Bassett – or “JBIII,” as he inevitably becomes known – the never-say-die leader of the Galax plant.

And that puts Macy on a trail that leads all the way from Martinsville and Galax to Indonesia and even China, where JB III was able to uncover evidence of furniture “dumping” – or selling below cost in an attempt to run competitors out of business, a violation of World Trade Organization laws.

His successful attempt to prove that dumping was taking place alienated many: the Chinese government, furniture importers, competitors and even many people in his own family. But it leveled the playing field for American manufacturing, and it’s pretty clear that it saved his factory, and by extension the economy of Galax.

Bassett’s story also furnished the material for a darn good book. While the huge cast of characters may be hard to keep up with at times, Macy is a perceptive writer with an excellent eye for detail and the gumption to stick to a story until she gets her questions answered.

The product of a factory culture herself – her mother worked for many years in an aircraft-lighting plant in Ohio – she can identify with laid-off workers having to retrain for new jobs. She tells their stories with sensitivity.

And it doesn’t hurt that Bassett is almost a caricature of the hard-charging industrialist, easy to write about. “Not just anyone,” Macy says, “can explain the intricacies of grouse hunting and Chinese currency manipulation and tell a dirty joke – all in the same breath.”

Of course, it’s a stretch to compare John Bassett’s experience in furniture manufacturing with that of so many other people in textiles, computers, cellphone manufacturing and the like, so much of which has gone offshore in the last several decades. In 2012, Macy notes, not one of the world’s 1.75 billion new cell phones came from the United States.

Several generations of my own family worked in textiles, and it still hurts to see the mill that provided their livelihoods sitting for the most part abandoned. That pain is one reason I put off reading this book for nearly a year.

But Vaughan-Bassett’s experience proves it is possible to fight back. As John Bassett says toward the end of the book – one of many so-called “JBIII-isms” – “Sooner or later we’ve got to turn and face our enemy again. I did it, and you know what I found out? They’re not as damn tough as everybody thinks they are.”