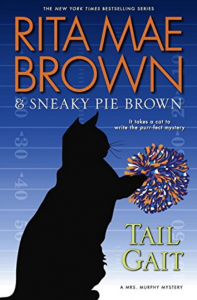 Mystery fans probably already know whether they like Rita Mae Brown’s Mrs. Murphy series. The books, set in a small town on the edge of Virginia’s Blue Ridge Mountains and close to the university town of Charlottesville, fall into the broad category of cozies. The many animals – pets and wild creatures – present in this rural setting talk to one another, and we readers are privy to what they are saying, although the human characters in the stories are not.  Reading what animals think, especially about their humans, is often amusing. If you don’t, however, like the conceit of talking animals, you probably won’t care for these mysteries.

The stories have some predictability beyond the clever and articulate animals. The same people appear in book after book, although some undergo life changes as time passes. Our heroine, Mary Minor “Harry” Haristeen, always gets into trouble by investigating whatever murder or murders are disrupting the bucolic bliss. Some animals, usually Harry’s two cats and/or her corgi, usually save her from whatever danger she’s stirred up.

But Rita Mae Brown manages to keep the stories fresh, not only by killing off people with ties to different sectors of the community, but also by working interesting information into her plots. This time, our initial victim (watch out for more) is a beloved elderly University of Virginia history professor, gunned down on the golf course, of all places.

Unable to figure out why anyone would murder the popular professor, Harry looks into his research. Along with her, we learn fascinating information about a Revolutionary War camp near Charlottesville for British and Hessian military prisoners. Through some chapters set during the Revolution, Brown helps us to learn more about the prison camp and its people, both the colonial soldiers stationed there and the prisoners. Of course, one of the British prisoners, an officer, had a corgi as a companion.

Brown ties everything – past and present, murders – together in a satisfying way. This is a good mystery with enough danger and action to keep things interesting.  It’s enhanced by a slice of history that may be unfamiliar to most readers.