Commas and other fun things

For decades, I unquestioningly followed Associated Press and newspaper style when it comes to, among other things, commas: There should not be a comma before the last “and” in a series. In recent years, however, I have discovered that there is a rebellion brewing among the younger generation. Many of my journalism students at the University of North Carolina at Chapel Hill passionately favor the use of what they call the Oxford comma. Now even Tom Dillon, a veteran journalist and wordsmith, has been won over.

Some things I learned by reading this book: 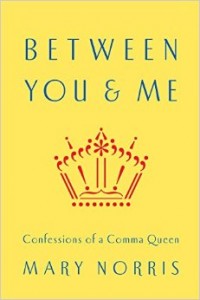 You have probably gathered by now that this is another of those wonderful books about language – these dashes are in place of a comma, which I’m not sure about here – and the use and misuse of it. The book is somewhat in the pattern of Eats, Shoots and Leaves, Lynne Truss’ 2006 book that was subtitled, “The Zero Tolerance Approach to Punctuation.” And Norris is just as funny as Truss, though I don’t think she’s quite as strict. Her first chapter is “Spelling is for Weirdos,” and she says the book is “for all of you who want to feel better about your grammar.” There’s also a chapter about profanity, which you probably shouldn’t read if it bothers you.

The book is unusual because, in addition to being a grammar book, it’s a sort of memoir. In it, we learn about Norris’ early upbringing in Cleveland, her various jobs as a swimming pool athlete’s-foot checker and milk deliverywoman, her various bouts with education, and her eventual move to New York and The New Yorker. (Please notice that there’s a comma before the last “and” in the series in that last sentence.)

Norris deals with such things as the “en” dash and the “em” dash, both created to mimic the width of the respective letters, and she goes into the ongoing argument about whether pronouns in English are sexist. The chapter is called, “The Problem of Heesh.” I think she probably agrees with me that this isn’t a serious problem – all you have to do is use the plural and the problem disappears. Norris sums up, “I hate to say it, but the colloquial use of ‘their’ when you mean ‘his or her’ is just wrong.” Then she adds, “Sing in me, o Muse, of that small minority of men who are secure enough in their masculinity to use the feminine third-person singular.”

She also notes that our problems are nowhere near as serious as those encountered with German, where everything has a gender: das Boot (boat) is neuter, der Tisch (table) is masculine, and die Katz (cat) is feminine. Good lord, even the word for maiden – das Madchen – in German is neuter; shouldn’t that be something to complain about?

Every writer about language seems to have an ax to grind, and Norris’ ax shows up in the title of her book. The proper usage is “between you and me,” not “between you and I.” A good many people apparently believe that the word “me” can’t possibly be right in a formal setting, she notes, but they’re wrong. You’ll understand that if you simply reverse the phrase: “Between I and you” can’t possibly be right, and it isn’t. Along this line, you might note the overuse of “myself,” when the speaker really means “me.”

I had a little quibble with Norris’ chapter on Herman Melville, in which she lets him get away with using “laid” instead of “lay” for the past tense of “lie,” but it’s a minor thing. Melville does use “lain,” a word that is about to disappear, correctly. And there’s a lot more here, including a copy editor (not Norris) who became a millionaire; such things apparently are possible. In sum, I had a good time with this book. If you like language, you will, too. (Note that last comma.)

This entry was posted in Contemporary Nonfiction, Grammar and writing and tagged commas, Grammar, Mary Norris. Bookmark the permalink.