I don’t know how this book got under the stack on my table, languishing for months while I read and listened to lots of others. I do know that I’m glad I retrieved it recently, after having seen it listed as one of the best books of the 21st century so far. It deserves that accolade and more. Other than my personal embarrassment, the tardiness doesn’t really matter. This is a book for the ages, not any particular moment. And, as might be expected, a movie is in the works. But don’t wait for that; read the book now.

THE BOYS IN THE BOAT: NINE AMERICANS AND THEIR EPIC QUEST FOR GOLD AT THE 1936 BERLIN OLYMPICS. By Daniel James Brown. Read by Edward Herrmann. Penguin Audio.  12 CDs. $49.95. 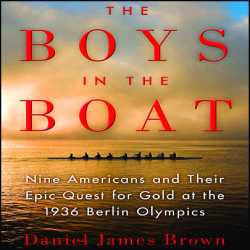 This is one of the best books I’ve read (listened to, actually, but the effect is the same) in a long, long time. It’s a sports story, and a good one, but it’s also a history, an inspiration, a compelling biography of one young man and a book about the American spirit that draws on reality, not slogans or prejudice.

The book’s title suggests that these nine Americans won the gold in Berlin, right? So you might think there would be little suspense. But as I listened to the climactic passages, I began to worry that the boys didn’t win, that it was their “quest” that was epic, not the outcome. I would have stopped and looked up the Olympic results, but I was too much in the grip of the against-all-odds competition.

Daniel James Brown takes a good sports story and elevates it into a great book.  Drawing on extensive research – personal interviews, journals, letters home, news accounts, archives – he brings to life the individuals who made up the eight-oar crew from the University of Washington in this sport in which the individual must give way to the team effort. He focuses particularly on one of the boys, Joe Rantz, who rose out of a heartbreaking family situation that would have crushed most people and joined the crew as his only hope to stay in college and find a place for himself in the world. Rantz’s story itself would have made a great biography, or provided the seeds of a compelling novel. But Brown also helps us to know the other boys and their coaches and mentors.

Without belaboring it, Brown makes it clear what a demanding sport crew is, giving us enough insight into the roles of the oarsmen and the coxswain and the fine points of racing to understand what’s going on when it counts.

And Brown goes beyond the competitions and the athletes to place this story in the context of what was happening in the United States and the world, especially Germany. The United States was in the throes of the Great Depression. The boys who made up the crew were, for the most part, desperately poor, and almost all of them had never rowed before they turned out as freshmen to try out for a coveted place on the team.

In Germany, meanwhile, Hitler was consolidating his power, organizing the 1936 Olympics as a chance to show the world just how great the country was becoming under his leadership. Brown carefully weaves in accounts of what was happening there, so that by the time we see the boys from Washington state rowing in sight of Hitler’s gaze and Leni Riefenstahl’s cameras, we fully comprehend the atmosphere and the gathering storms. There was talk of the U.S. boycotting the Olympics, as news spread about what was happening in Germany, but people in high places chose to believe what they wanted to believe.

Those who think of crew as a minor sport will be surprised to learn that in the 1930s, it was a huge spectator sport, right up there with college football and major-league baseball. Reporters followed the teams closely, writing about their training and prospects. Major races were attended by huge crowds and broadcast on live radio nationwide. The crews from the University of Washington and its West Coast rival, the University of California, were upstarts, rough boys from farms and forests who entered a heady foreign world when they headed east once a year to compete with the Ivy league schools, the Naval Academy and other elite Eastern colleges.

But being a star college athlete in a highly popular sport did not mean in the 1930s what it does now. The boys from Washington had demanding training schedules throughout the academic year, and were expected to keep their grades up, but they were not given scholarships, only the chance to get some campus job that would help them afford school.  Most had night jobs, and summers saw them doing hard manual labor to save up cash for the next academic year. When they traveled east each summer, it was on a tight budget. And after they won the right to represent the United States in Berlin, they were told they would have to come up with the money to get there.

Despite many setbacks, they did make it to Berlin, and Brown presents their competition there as nerve-racking and nail-biting as it must have been for the spectators there and all those huddled around their radios back home.

An extensive epilogue follows the boys as they became men, always carrying with them the memory of that time in Berlin when they transcended self for the rest of the team – and for the honor of their country. Brown also tells what happened in Germany once the glorious games were over, horrors that had American boys over there again in just a few years on a deadly serious mission.

By the time Edward Herrmann read Brown’s concluding words, I had tears in my eyes – tears of pride in all that’s good in the American spirit, as it was exemplified nobly by the boys in the boat.