What fun it is when the author of a beloved series gives us a new book. 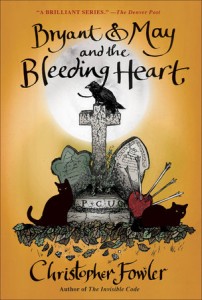 Yes, they are back, despite repeated attempts by various powers-that-be in London to get rid of them or at least render them ineffective. Arthur Bryant and John May, the eccentric, cranky but ever-so-wily elderly detectives who are the heart and soul of the small but successful Peculiar Crimes Unit are once again solving some of London’s weirdest crimes, to the delight of any readers who make their acquaintance.

You needn’t have read any of the previous 10 books in the series to enjoy this one, but if you have, you will know that the Peculiar Crimes Unit dates to World War II, when London’s Metropolitan Police Force needed a discreet unit to handle sensitive cases that might harm the public’s morale. The war is long over, but the unit, led by its intrepid and unorthodox senior detectives, Bryant and May, presses on. In latter days, it increasingly deals with cases that are strange, baffling, maybe with a hint of the supernatural or black magic. Bryant, especially, knows people who operate in the shadows.

Over the years, Bryant and May have become set in their ways, and the ways in which they are set have little to do with contemporary police procedures, rules and regulations. They tend to do what they think best, no matter where the unit is moved, no matter who tries to shut it down or rein it in, no matter what threats are made.

These books are mysteries, and they deal with murders and other serious crimes, but they are also very funny. It’s hard to think of an adequate word to describe the PCU and its people and methods. Quirky comes to mind, but doesn’t suffice. The books are also poignant, as the geriatric detectives, especially Bryant, deal with failing health, loneliness and changing times.

This time, the PCU has been placed under the jurisdiction of the City of London. Raymond Land, who is nominally the unit chief, tries in vain to convince his crew to behave lest the new bosses crack down on them: “This means no weird stuff. Try to behave for once. Avoid provocative behaviour. Don’t be imaginative. …” Of course, his counsel is roundly ignored.

The detectives don’t have time for playing by the rules. A strange case falls into their laps when a teenager sees a dead man rise from a grave in an old cemetery – and before long, the teenager is killed in a mysterious hit-and-run accident. Meanwhile, Bryant begins investigating the disappearance of seven ravens that live at the Tower of London. Legend has it that if the ravens are gone, England will fall. Bryant’s old friend who works as the Raven Master is more worried about the state of his job if the loss of one of the tower’s main tourist attractions is discovered.

Before long, the unit is dealing with body snatchers, bleeding hearts, a mounting death toll, more coffins and a growing feeling that these two seemingly disparate mysteries have some strange connection.

As always, Christopher Fowler gives us a witty, weird, thoroughly entertaining mystery, steeped in London history and atmosphere, and peopled with eccentric yet believable characters. These books are great entertainment.

1 Response to How peculiar: missing ravens and walking dead